THERE are many restaurants in Britain where you can be sure of an Irish welcome, as well as a dish or two influenced by home.

Here are a few of our favourites...

In the shadow of Edinburgh Castle, the multi-award winning Dine Edinburgh is a brasserie-style restaurant in the cultural hub of the Scottish capital. Situated above the Traverse Theatre, it is owned by Paul Brennan — Irish on both sides of his family. His restaurant serves the finest locally sourced produce from the Borders and Highlands of Scotland whilst championing small independent cottage industries. Expect dishes such as baked razor clams, or red cabbage and mango slaw with brioche tuile.

Most Irish pubs in Britain now serve some food along with the alcohol, often substantial, sometimes imaginative, sometimes not. A handful, however, have taken their culinary interest a step further and now regard their dishes as a vitally important part of what they offer. Molly Malone’s is one such establishment. The pub is situated in the heart of the entertainment hub of Glasgow, just a stone’s throw away from The Theatre Royal and The Pavilion Theatre. The food is generally basic, hearty fare, but served with innovation and panache. As well as one of the best pints of Guinness in town.

Jinty’s is another Glasgow bar where you’ll be served a meal that is substantially more than just pub grub. You’ll get burgers, Scottish pies (a delicacy in their on right), but you’ll also get a selection of seafood that wouldn’t disgrace a top restaurant.

There’s great Guinness, great desserts, and everything from oysters to haggis pakoras. And why not? Glasgow is reputedly the birthplace of chicken tikka masala. Many years ago a customer at a nearby Bangladeshi restaurant wanted gravy on his chicken tikka (“It’s too dry, Jimmy”). The customer is always right, a sauce was quickly curated, and so was born Britain’s national dish. Perhaps Jinty’s haggis pakora will reach the same heights of fame.

Jinty’s father, by the way, was Vincent O’Kine, a well-known boxer from the Maryhill area of Glasgow.

Head chef at Allegra in the stunning Manhattan Loft Gardens is Irishman Patrick Powell. He began learning his trade at Dublin's Michelin-star L'Ecrivain under the acclaimed Irish chef Derry Clarke. He’s now in charge of the Allegra, based in Stratford. His menu’s focus is modern European influenced by produce from their organic farm just 40 minutes away.

Robin, from Sandycove, Dublin, spent many years learning his trade on the Amalfi coast.

Born and raised in Ballyivor, Co. Meath, Richard Corrigan is probably the best-known Irish chef in London. So you can always expect something Irish on the menu at his eponymous restaurant in Mayfair.

Expect Tipperary beef tartare, or the likes of Carlingford oysters and Irish beef en croute. Many of the ingredients will have come from his farm in Cavan too. 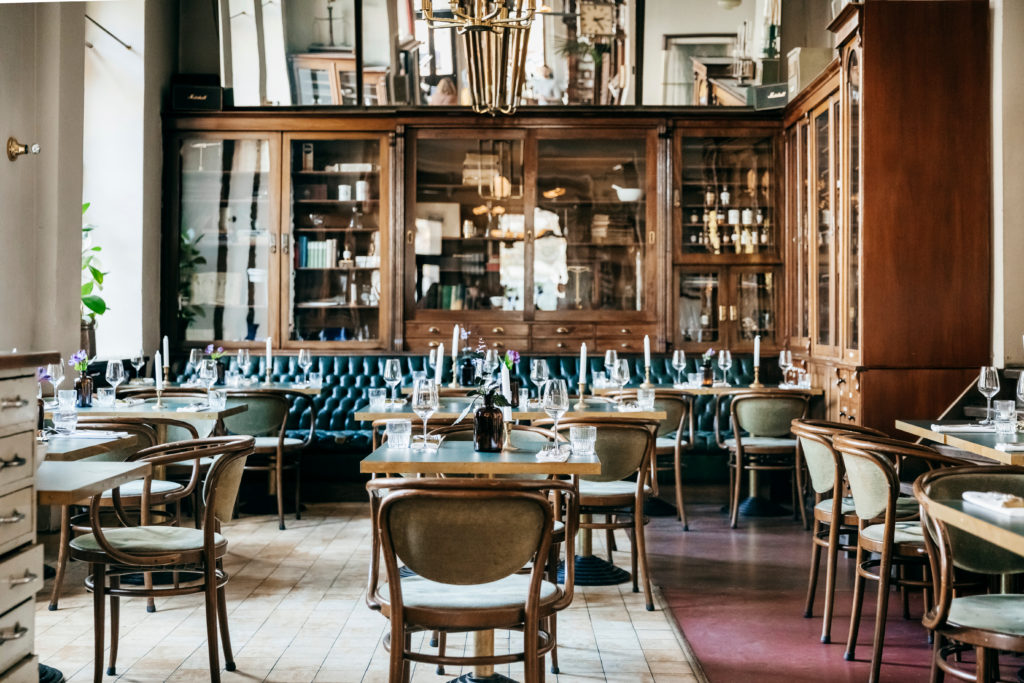 Bentley’s has been serving its seafood delights and feeding the hungry shopping masses for over 100 years. Richard Corrigan has been guiding the restaurant for the last dozen years, and turned it into one of the top tables in Europe.

Clare Smyth has been called the world’s best female chef — named as such at the World’s 50 Best Restaurant awards gala in Bilbao in June, 2018. Called an outrageously outdated category, the Co. Antrim woman qualifies, quite simply, as one of the best chefs in the world, never mind gender.

She left the farm in Northern Ireland at 16 to train in England, working under Heston Blumenthal and the Roux brothers. She eventually became head chef at Gordon Ramsay’s Chelsea restaurant, earning herself three Michelin stars and an MBE into the bargain.

The first bar from the Irish duo Aaron Wall and Ciarán Smith, this speakeasy-style establishment — complete with leather banquettes and bare brick walls — serves terrific cocktails such as the Whiskey Smash.

Or you might want to try their "Da's Irish Stew" -  lamb, carrots, onion, mushroom, parsley, thyme, garlic and "served with Ma’s brown bread".

Then afterwards you can tuck into the Guinness like your old Uncle Jimmy, you know, the one who was “fond of a drink”.

Great selection of beers and wine to go with some well-above-average pub grub, The Sunday roast, in particular, is spoken of in hushed tones. They even offer an exceptionally and imaginative fine vegetarian roast option.

An Irish family-run restaurant, with a very ethical outlook. To go with their full Irish breakfasts, soda bread, scones, barmbrack, they serve the award-winning coffee, Indigo Valley. The beans are either Fairtrade or Rainforest Alliance certified.

Classic gastropub grub with strong Irish influences. Colcannon cake to go along with your marinaded salmon, and they serve an excellent pint of Guinness.

The pub might just look familiar if you’re a keen film buff.

It was a set in the cult gangster film classic ‘Get Carter’, as the first stop for Michael Caine’s hitman character when he arrives in Newcastle .