THREE brothers who took on the London Marathon to raise money for charity managed to start and finish the challenge together.

Every year Merrill, Rob and Darren Lynch, of Lynch Plant Hire, challenge themselves to a ‘brothers Lighthouse Day’ to raise money for the Lighthouse Construction Industry Charity - which provides financial and welfare support to those who are suffering long term injury or illness within the construction sector.

This year they decided to tackle the London Marahon, and, after months of training, the frustration of injuries and last-minute worries in the build-up, the big day arrived last month.

While Rob had previously completed the challenge in 2005, the brothers all experienced some pre-race nerves before setting off in the sunshine on April 28.

They claim their aim was “to stay together and finish together, whatever the time it took” and they managed to do just that, although they admit it wasn’t all plain sailing. 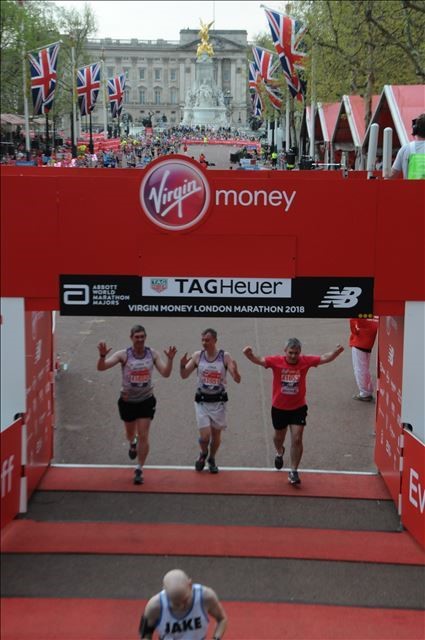 The Lynch brothers hit the finish line together

Darren said: “Despite the brilliant crowd cheering on the ‘Lynch Brothers’ and running past the amazing London landmarks, the later miles were a bit of a blur for us, though we do remember getting passed by a couple of rhinos!

“However, from mile 24 we were feeling cooler and were excited to reach the end, and so we upped the pace, determined to finish strong and enjoy the run along the embankment, past the Houses of Parliament and towards Buckingham Palace to the finish line on the Mall.”

The three ran the 26.2 miles in 5 hours and 50 minutes on a desperately hot day, raising nearly £8,000 for the Lighthouse Charity in the process.

Merrill added: “We are all so thankful for the sponsorship that we have received and we are delighted to have raised just shy of £8000 for the Lighthouse Construction Industry Charity who provide financial and emotional support to fellow construction workers in need.”