A CHUNK of the General Post Office building that was the focal point for Easter Rising events in Dublin 100 years ago was among the historic artefacts that went under the hammer in the city over the weekend.

Conducted by Fonsie Mealy Auctioneers of Castlecomer, a unique 'Centenary Sale', held at the Gresham Hotel in Dublin, featured more than 600 important items from Ireland’s history, some which have never before been seen at auction.

The collection of books, medals, letters, photographs — and the piece of the GPO building – came from seismic Irish events including the 1798 Rebellion, the Fenian Rising, the Civil War and the 1916 Easter Rising.

A wide variety of signed books, manuscripts, correspondence, archives, prints, posters and other artefacts from these iconic dates were also up for bidding.

A particularly prominent item was an original copy of the 1916 Proclamation of the Irish Republic, reputed to be the one which hung in the General Post Office in Dublin during the Easter Rising. 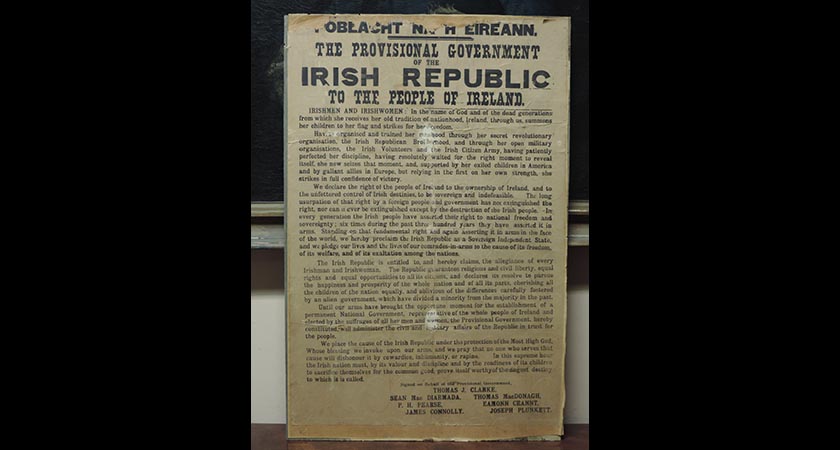 George Fonsie Mealey, one of the directors of the auction house, who conducted the sale along with his father Fonsie told The Irish Post how the Proclamation’s authenticity was verified.

It was brought out of the GPO by Dr John Ryan. He was one of the last people to leave the building, along with James Connolly. Ryan was a founder-member of the Irish Volunteers, and in later years went on to become a Fianna Fáil Minister. So the provenance of this copy of the Proclamation was guaranteed by him.”

"Provenance is a big part of any auctioneer’s job when it comes to historical items", he added.

“We’re dealing with material going right back to the 1798 Rebellion,” says George, “and provenance is paramount. We spend a lot of time making sure the claims are absolutely watertight. After all, we’re dealing with items handled by some of the greatest Irish people ever to have lived, and the bidders are buying on those grounds.”

Another lot that attracted huge interest was the Moore Street ‘Flag’ of Truce; a white linen handkerchief believed to be the original flag of truce shown by Captain Michael William O'Reilly, at Moore Street in Dublin.

With this signal Captain O’Reilly indicated that the volunteers wished to surrender their final position on the Saturday afternoon of April 29, 1916.

Several books were included in the sale, some written by the signatories of the Proclamation while others were personally inscribed by them.

Subject material ranged from the likes of The Poetical Works of Thomas MacDonagh to a very rare copy of Irish Leaders of 1916 - Who Were They?

Scroll down to see the list of ten of the most important items up for sale...

This presentation copy is inscribed and signed in Irish to 'Do mo cara Caitlin De Barra, April 30, 1922’ (To Kathleen Barry, sister of the martyr Kevin Barry.) “It was a really exciting collection,” said Mr Mealy. “Many of the items were fresh to the market, and of course that’s what keen-eyed collectors are looking for.”

The auctioneer reckons between 70 to 80 per cent of the bidders were Irish-based.

“But we had a lot of interest from ex-pats too — from Australia, the US and across the water in Britain. We had our own core of private collectors as well as getting interest from institutions, universities, the National Library and some of our local museums.”

A sale such as this takes a huge amount of organisation - George Fonsie Mealy explained the mechanics.
“Well, the build-up began last October. We had a core collection ourselves, but wanted to build up the sale. So we began to circulate details of the sale, got plenty of publicity and generated interest. We were very pleased with the results, with many items coming onto the market for the first time. Most of the items came from private collections, or from families connected to the items.”

The range of items at the sale was as interesting as it was extensive.

“There were some really unusual items such as a stone balustrade from the damaged GPO, as well as a set of keys from the GPO. The latter, a bundle of four old keys had an attached contemporaneous note on the ring stating that the keys were found in the ruins of the GPO after the Rising.”

Ten of the most important items up for sale...

Two of the original pencil drawings for the Kevin Barry memorial stained glass window made at the Harry Clarke Studios, by Richard King. 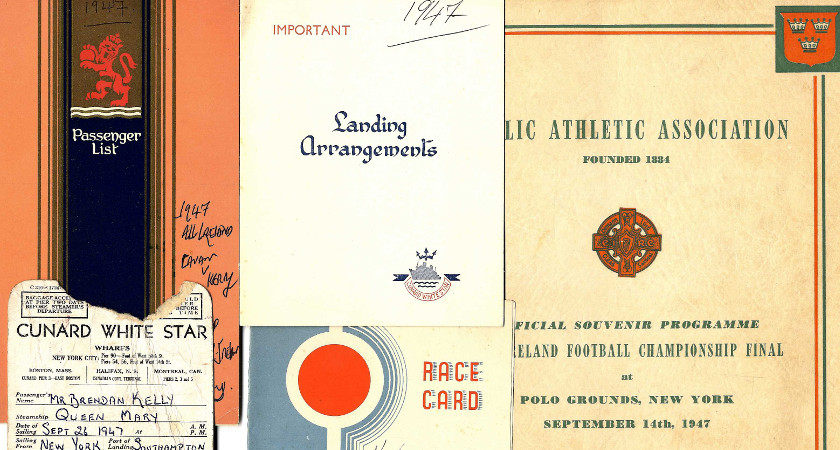 GAA memorabilia that went under the hammer last weekend

Early GAA memorabilia, including a manuscript diary of Pat Davin, brother of Maurice, the first president of the GAA. The sporting memorabilia also included a collection of early GAA programmes, pamphlets and medals. 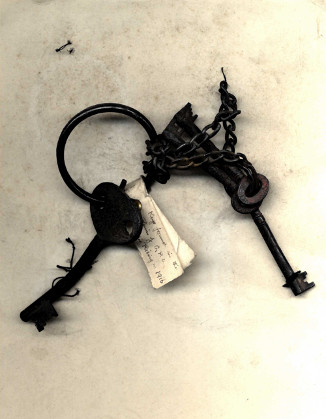 Original keys of the GPO used during the 1916 Rising

A book by Standish O’Grady, plus a collection of signatures, letters and files relating to Irish female prisoners from the Civil War. Known as The Dangerous Ladies, many were incarcerated in Kilmainham Gaol.

7. Postcards from a hero

Postcard of Sergeant Michael O'Leary (1890 - 1961) from Macroom, Co. Cork who was awarded the VC for conspicuous bravery at Cuinchy, where he attached two barricades, single-handedly killing ten Germans on February 1, 1915.

An original copy of the 1916 Proclamation of the Irish Republic, reputed to be the one which hung in the General Post Office in Dublin during the Easter rebellion.

The Moore Street ‘Flag’ of Truce; a white linen handkerchief believed to be the original shown by Captain Michael William O'Reilly, at Moore Street in Dublin on April 29, 1916.

The “excessively Rare” Fenian Bond from The Fenian Rising 1866. The National Bank of the Republic of Ireland $500 Dollar Bond is engraved with American Eagle and cameo portraits of Wolfe Tone and Robert Emmet and possibly unique as the Fonsie Mealy auction house has “not found any example sold in the last 30 years”.

The historic moment British troops marched out of Ireland in 1922