Detectives have launched an appeal for information 44 years after the murder of 22-year-old Amala Ruth De Vere Whelan in West London.

Met detectives are also particularly interested in tracing any friends and relatives of Amala Whelan.

She had been brutally beaten, raped and strangled to death with a stocking. Her body was found several days later.

When officers entered the property, they discovered the word ‘ripper’ had been sprayed onto the front room wall with detergent from a washing up liquid bottle.

There was no sign of forced entry, leading detectives to believe that Amala either knew her assailant or had allowed him access to the flat.

A full forensic and fingerprint examination was carried out at the time which failed to link any suspect to this offence and despite extensive enquiries the case has remained unsolved. 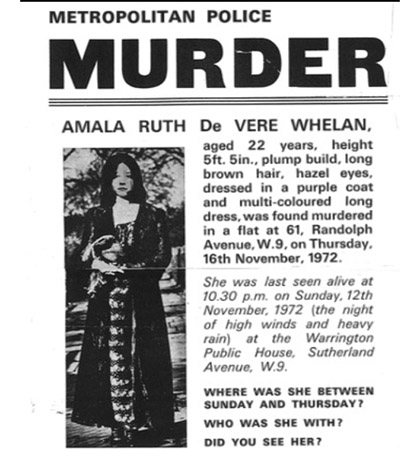 Detective Inspector Susan Stansfield, from the Met's Special Casework Investigation Team at the Homicide and Major Crime Command, said: "More than 44 years have now passed since Amala’s death but I am convinced that someone, somewhere, knows the circumstances of her brutal murder.

"It was a long time ago but I'm sure there are people in the local area who remember Amala’s murder.

“Did you live in the vicinity of Randolph Avenue in the early 1970s? Did you see or hear anything suspicious on 12 November 1972?"

Amala had lived in the flat in Randolph Avenue for about three weeks prior to her death.

Before this she was working and lodging at The Bar Lotus on Regents Park Road in Camden.

At the time of her death, Amala had a younger sister aged about 12 years old, who would now be about 56 years of age.

DI Stansfield added: "Amala suffered a brutal death and the identity of the suspect has remained a mystery.

"She was a very popular and attractive female who had a wide social network of friends. She was an active member of the CND (Campaign for Nuclear Disarmament) party, and had numerous friends in the art world.

“If you have any information, no matter how insignificant you think it might be, please come forward.

"Maybe you didn't contact police at the time as you were too scared, but with the passage of time now feel able to tell us what you know in confidence."