THIS week Darkness Into Light, the hugely successful Irish suicide prevention event, will come to London for the first time.

Now in its sixth year, the fundraiser attracted 40,000 participants in 20 locations around Ireland last year alone.

Described as a “unique early morning experience” the event gets runners and walkers together to raise money while experiencing the daybreak in a new way, with the dawn serving as a powerful reminder of hope for those who have been affected by suicide.

After completing the 5km route, participants sit down together to enjoy breakfast. So far around 260 people have registered online but organisers are hoping to reach their target of 500 in the coming days. This marks the first time the event will ever be held outside Ireland with Irish strongholds London and Sydney the first to host international runs.

Tara Cronin of the Kerry Association London was in Dublin last year when the funeral of Kerry teenager Donal Walsh was taking place.

Walsh, who died of bone cancer, fundraised tirelessly while he was ill and set up the #Livelife Foundation to spread an anti-suicide message.

When Cronin returned to London, Walsh’s funeral was still on her mind.  “A couple of people I know, some young men in the North West London area had taken their own lives so I contacted Pieta House with a view to arranging something over here.”

The decision was made to bring Darkness Into Light to London and so far Cronin says they have had a “great response” from the GAA and business communities in London.

Cronin is urging all who want to take part to register online, or to come along on Saturday, May 10 where they can sign up from 2am onwards. 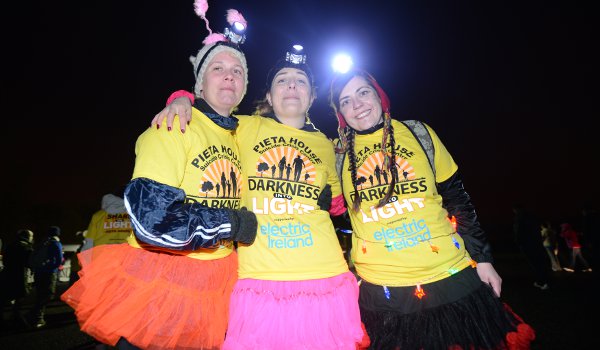 The fundraiser is the brainchild of suicide prevention charity Pieta House, set up in Ireland in 2006 by psychologist Joan Freeman.

Speaking at the launch Freeman said: “Darkness into Light is an incredible experience and one that people remember for a long, long time. There’s already huge anticipation and with so many new locations involved for 2014 it’s going from strength to strength.”

Sarah Murphy lives in East London but took part in a Darkness Into Light event in Dublin after her 31-year-old friend Cian took his own life. “I ran with three friends,” she explains, even though they were still “very much in the throes of grief”.

“When my alarm went off at 3am it took every drop of energy I had to get to Phoenix Park for the start but it was beautiful. As we got towards dawn and came closer to the finish line and passed the choir singing at the top of a tough hill, I definitely shed a few tears.”

Freeman also reminded the public about the Mind Our Men campaign, asking everyone to bring a male friend or family member with them.

“We’re making a big push this year to get all the men out — it means an early rise but they won’t regret it.”

“It's very sad to think, but most Irish people have been affected by suicide in some way,” he said.

“Raising awareness about how common mental health problems are, and breaking down the stigma attached to depression and other related issues, will help people with depression not to feel ashamed about seeking out help either through friends, family or support groups.”

The latest report from Samaritans, which looks at data from the Republic of Ireland and Britain, shows that the suicide rate for males here is its highest since 2002. The female rate has also significantly increased since 2007.

Suicide is still thought to be under-reported because of stigma, religion and social attitudes. Suicides are also often hidden under other causes of death including road accidents and drowning.

Tracey Lait is second-generation Irish, her family originally come from Co. Limerick. In June 2010, Enda, the father of her 18-month-old son took his own life.

She is doing the run on Saturday with a group of friends because she wants to raise awareness and “show solidarity with the Irish community living here”. She says she is keen to send a message that there are support services available for those who need them.

“With Enda, he was not aware of his mental health needs,” she explains. Today she is doing well because, she says, she took advantage of the support available to her.

Her son, now five is “too young to have an understanding of what happened to his dad just yet” but she hopes that Darkness Into Light will become part of a legacy for him, and that they might take part together when he is old enough.

“It’s a conversation we will have down the line but I hope that if this year is a success then it will be around so in the future so he knows it’s there if he ever needs to speak to someone,” she added.

IN PICTURES: Tens of thousands take part in Darkness into Light 2022 as events return after Covid