FORMER Olympic Council of Ireland President Pat Hickey is to be placed on house arrest in Rio today, and the OCI are paying for the apartment.

Judge Fernando Antonio de Almeida of the Criminal Court in Rio granted an order last night (August 29) to revoke the probation of Mr Hickey, placing him on house arrest.

The 71-year-old was also ordered to return his passport to Brazilian authorities, preventing him from leaving the scountry.

Mr Hickey was arrested on August 17 at his hotel room in the Barra de Tijuca district of Rio,  in relation to the illegal reselling of Olympic tickets for the Rio games.

Brazilian police found emails between Pat Hickey and THG boss Marcus Evans, allegedly in conversation about the sale of tickets for events dating back to 2010. 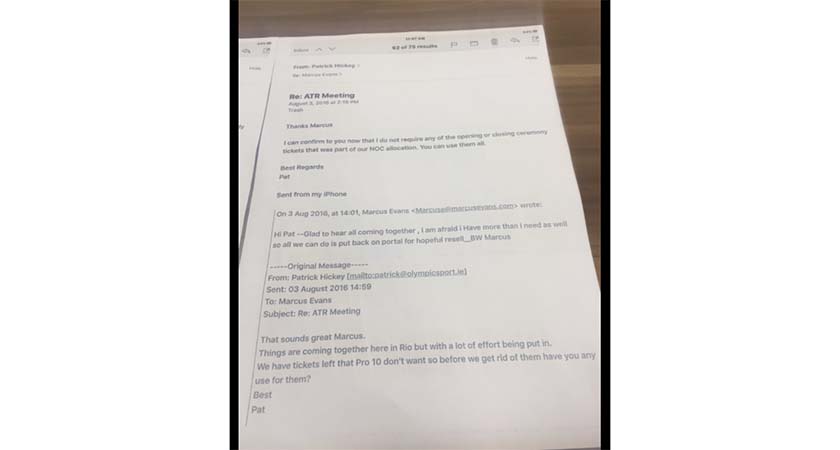 On of the email exchanges between Pat Hickey and Marcus Evans, presented by Brazilian police at the press conference following Mr Hickey's arrest. (Source: Twitter/SInead O'Carroll)

A spokeswoman for the OCI told The Irish Post this morning that a one bedroom apartment had been rented for Mr Hickey for one month in Rio, at a cost of "approximately €2,300".

The Department of Transport, Tourism and Sport confirmed that the OCI received funding from the state in 2016 amounted to €520,000.

In a statement from the state judiciary in Rio, it was announced that the judge accepted the request of Mr Hickey's Irish solicitors to grant a habeas corpus.

Habeas corpus writs are typically used to bring a party who has been criminally convicted in state court into federal court to review the legality of the party's arrest, imprisonment or detention.

Judge de Almeida also noted that none of the three crimes Mr Hickey is charged with carry a sentence longer than four years, and is "unlikely to keep him in prison where he is."

The Judge concluded that Mr Hickey's release will not bring "any obstacle or risk to public order, criminal investigation or future application of criminal law."

Earlier this month, Irishman Kevin Mallon was arrested for reselling tickets for the Opening and Closing ceremonies of the Games.

Mr Mallon, along with Mr Hickey, was detained in Rio's maximum security prison Bangu 10 for 22 days, before being released on bail on Saturday.