IT TAKES food delivery to a whole new level – but one Maris Piper potato managed to make its way across the Irish Sea to Derry.

Even more unusually, the potato was not packaged and just had the recipient’s address and a first class stamp on it.

And it managed to arrive at its final destination in Derry City on Saturday afternoon.

Dermot Bradley and his family were shocked to find the postman on their doorstep holding out the potato.

They soon discovered it had been sent by Dermot’s sister Edel from Birmingham as a thank you for helping to organise her potato-themed wedding.

“My 11-year-old son answered the door and he came in with his eyes as wide as saucers and he just stood there with the spud in his hands,” Dermot told BBC Northern Ireland.

“We just erupted into laughter.”

Once they had composed themselves, the Bradleys noticed a small note on the back of the potato from his sister.

In an unusual move, she sent a potato instead of a thank you card after her recent wedding.

“Edel's been living in England for a long time and she decided to come back to Derry to get married,” he said.

“Ireland being synonymous with the spud, she decided to have a spud-themed wedding.

“She's a good, practical Derry woman so she went and bought two stone of spuds to decorate the hotel.”

The postman told the Bradleys that the potato was the most unusual item he had ever delivered. 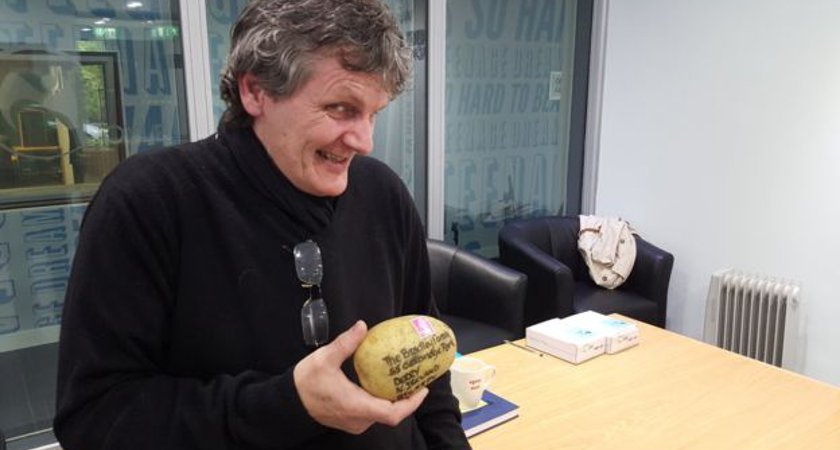 Dermot Bradley with the potato his sister posted from England. Picture via BBC NI