PEOPLE HAVE used funds gathered from a Crowdfund account to publish an advert pleading for the end of both Jackson's and Olding's rugby careers.

139 people pledged money to take out an advertorial in the Belfast Telegraph to catch the attention of the IRFU and Ulster Rugby.

The content of the social media exchanges involving Paddy Jackson and Stuart Olding was reprehensible. Such behaviour falls far beneath the standards that your organisations represent and as such we demand that neither of these men represents Ulster or Ireland now or at any point in the future.

We expect an answer to this letter. 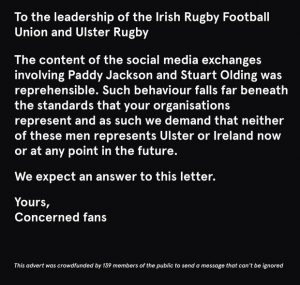 According to Belfast Telegraph, the campaign to publish the open letter was set up by Anna Nolan.

Speaking to BT, Miss Nolan said the messages found exchanged between the rugby players were troubling: "A friend and I felt, like many people around the country do, that the WhatsApp exchanges as revealed in court goes against any moral standard of what can be considered acceptable behaviour...

"These players have a national and international platform and the IRFU and Ulster Rugby have a role to play in enforcing moral standards."

Miss Nolan said she hoped that the trial had made sports players aware of their actions: "The language they [Jackson and Olding] used, which is an undisputed fact, shows a deep level of disrespect for women...

"We expect the standards that IRFU and Ulster Rugby purport to hold to be enforced — it is important that all current and future sports stars realise that this behaviour is beyond the pale."