ANTI-LOCKDOWN PROTESTS in London descended into violence on Saturday with at least eight police officers injured in the unfolding chaos.

Two officers were hospitalised following the unrest though they are not thought to be in a life-threatening condition.

The Metropolitan Police confirmed that five arrests were also made during the "Unite for Freedom" anti-lockdown demonstration on Oxford Street this past Saturday for a variety of offences, including assault on police.

Thousands of protesters marched on the English capital, in part, to voice their opposition to the proposed use of vaccine passports in the UK.

Vaccine passports would allow the public to prove that they have received a COVID-19 vaccination, which supporters believe will allow major events to resume.

However, those opposed to the idea believe it will result in discrimination against those who have not been vaccinated.

While vaccine passports were reason to remonstrate for some of those in attendance, others attended the protest to voice their concerns over the Covid-19 vaccines and continued lockdown restrictions.

Demonstrators gathered with banners and placards featuring slogans like “No To Vaccine Passports” and “You don’t need proof to know truth.” 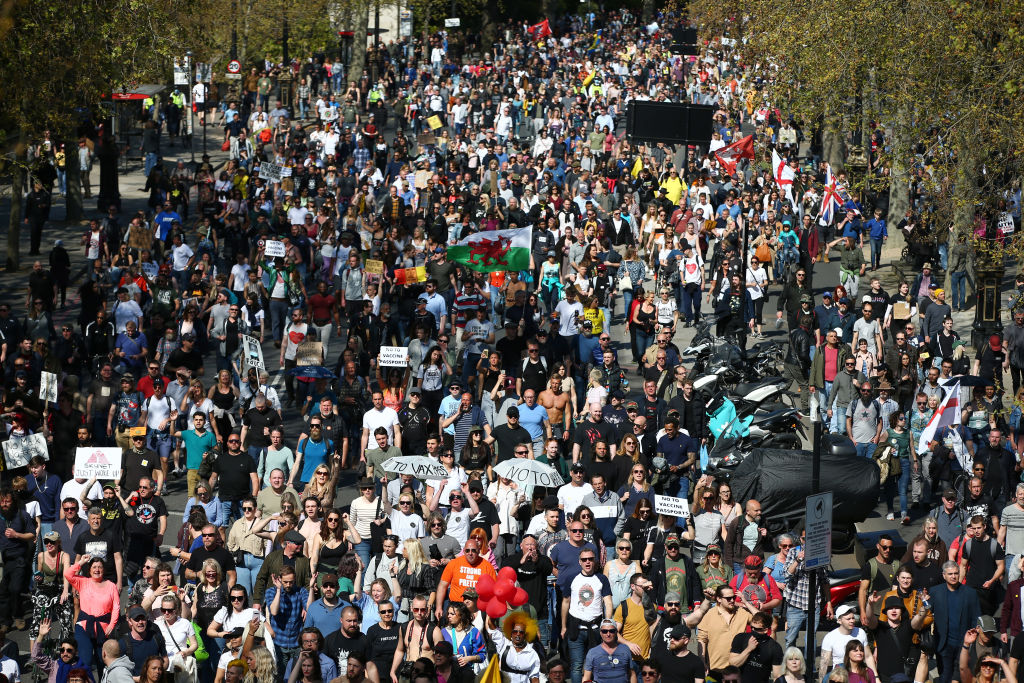 Several also drew criticism online for attempting to draw parallels between the ongoing vaccination of the UK public and the treatment of Jews in 1940s Germany.

A number of demonstrators were pictured wearing yellow Star of David-style badges repurposed to protest against the lockdown restrictions while a banner emblazoned with the words “Covid-19 Vaccine Holocaust” was also spotted.

The demonstrations in London, which featured several notable celebrities including former actor turned right wing pundit Laurence Fox, served as a stark contrast to events in India, where the Covid-19 death toll continues to rise at an alarming rate.

Though the London protest began peacefully enough, things turned ugly as the day continued with running battles breaking out between a small contingent of the demonstrators and police on the scene at Hyde Park.

Protestors launched bottles and other objects at police while they attempted to disperse the crowds gathered.

One of the most striking images from the day’s demonstrations was that of a female police officer with a bloody head-wound.

NEW: Battle of Hyde park - Police officers have been attacked with missiles at the London anti vaccine protesters. #hydepark pic.twitter.com/ck1gyG0X6w

Reflecting on the disorder witnessed, John Apter, national chairman of the Police Federation of England and Wales, tweeted: “These officers are just doing a job, they’re somebody’s son, daughter they’re mums and dads.

“To be targeted in the way they are says a lot about the society we’ve become.

“I will continue to do my best to support them but I need Government to do more, much more.”

The protest came two weeks after the easing of lockdown restrictions began in England with non-essential retail reopening and pubs and restaurants resuming outdoor service.

Gyms, swimming pools, zoos and nail salons have also reopened along with hairdressers and other nonessential services.

Despite the return to some form of normality Prime Minister Boris Johnson has called for the public to “behave responsibly”.

It comes as the UK continues its rollout of vaccinations against Covid-19, with over 50% of the country’s population now inoculated against the coronavirus.