TULLAMORE, IRELAND - JANUARY 14: Well wishers leave flowers at the murder scene of Ashling Murphy on January 14, 2022 in Tullamore, Ireland. The 23-year-old school teacher was attacked on the banks of the Grand Canal outside Tullamore whilst out jogging on Wednesday afternoon and died at the scene. A 40-year-old man arrested over her murder has been released "and is no longer a suspect", police said. (Photo by Charles McQuillan/Getty Images)

ORGANISERS OF a vigil in memory of Ashling Murphy in Dublin today have said that this must be a watershed moment in ending men's violence against women.

Ashling, a 23-year old teacher, was running along a popular canal rout in Tullamore, Co Offaly, when she was attacked and killed.

A man was arrested shortly after, but he was released last night and is not longer a suspect in Garda enquiries.

Vigils will be held across the country over the coming days in towns and cities around Ireland, with the organisers of one outside the Dáil at 4pm today saying changes must be made to prevent similar deaths from occurring in the future.

"In the wake of the senseless killing of Ashling Murphy, women across Ireland have been sharing their stories of abuse and harassment, and how they curtail their lives so that they feel safer," said Orla O’Connor, Director of the National Women's Council of Ireland.

"Ultimately, we know there is no behaviour change women can make that will keep them safe from men’s violence. So we need to talk about what we can do."

"Women must be safe in our homes and our communities; we need to end men’s violence against women.

"At the highest level, this requires real political leadership. We need one Government department with responsibility for ending gender-based violence, with a Minister responsible for violence against women sitting at the Cabinet table. As well as greater supports and resources for women who experience gender-based violence, we must make it easier for women to report domestic and sexual violence."

Ultimately, she said, there needs to be a focus on prevention.

"Preventing men’s violence against women starts with creating a zero-tolerance culture towards that misogyny and sexism that creates the context in which gender-based violence occurs.

"This means, for example, funding and resources for programmes in second and third level education. It means policy change in our education system to ensure the casual sexism that girls and women experience is unacceptable. It means zero tolerance toward street harassment, and always toward harassment in the workplace."

Other vigils are taking place in Cork, Belfast, Tullamore, and London, among others, in memory of Ashling this weekend.

Below is a list of vigils taking place, with several others confirmed since the below graphic was created. 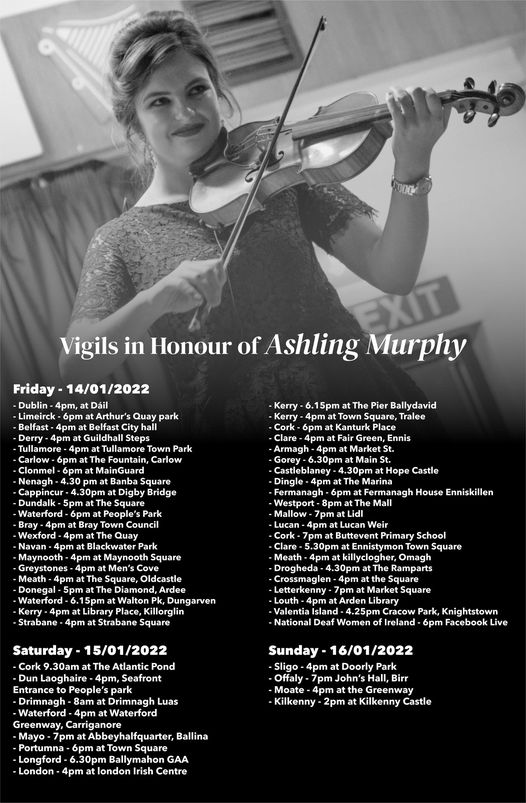 Taoiseach Micheál Martin told media today that he was always of the view that national school teachers are "the bedrock upon which our society was built on."

"In many ways Ashling Murphy represented and personified the very best of that tradition of national teaching," he said.

He said her death has united the nation in solidarity "in revulsion of what has happened."

"No stone will be left unturned in bringing this investigation to a completion."

Tánaiste Leo Varadkar said he thinks "for men in particular, we need to make sure that we understand and that we teach our boys that violence against women is never justified."

"The country is reeling. I know people in Tullamore must be worried at the moment because the killer is still at large," he said.

"And I want to assure people that all of the resources of the gardaí are going into making sure this person is found and that they are brought to justice, and that people can feel safe again."