THE HSE have released a map showing the areas of Ireland worst affected by the deadly influenza virus sweeping the globe.

The data – which takes into account other types of flu outside of the ‘Aussie’ strain – was collected from December 18-31 last month.

The darker the colour red on the map, the worse the area is affected.

Worryingly, the map shows that the bug has now spread to every part of Ireland.

On Monday, the Irish Nurses and Midwives Organisation (INMO) revealed that more than 550 people are currently waiting on trolleys in Irish hospitals. 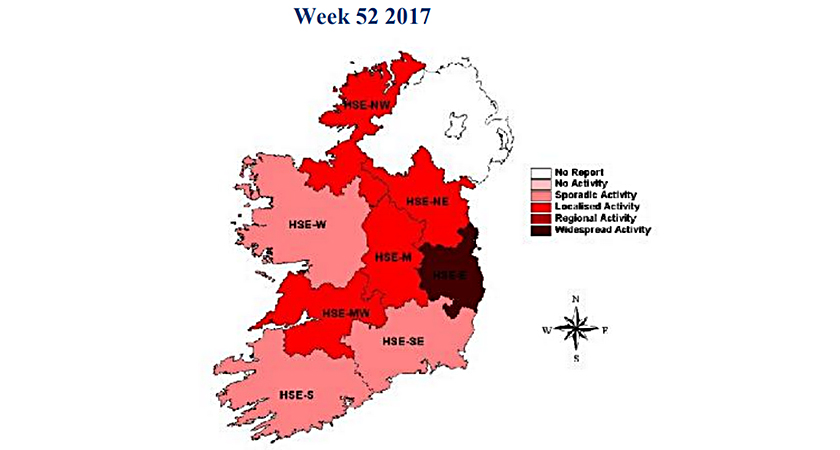 The most recent data shows that Aussie Flu has spread throughout Ireland in recent weeks (Picture: HSE)

Elsewhere in Dublin, eight children are currently waiting at children’s hospitals across the Irish capital.

Liam Woods of the HSE said that the new influenza is around a fortnight away from reaching its most virulent stage.

"It's acknowledged there is a lot of strain, at the moment hospitals are coping under a lot of pressure, and I would acknowledge there is great work being done by clinical and other staff in hospitals,” he said.

“Really, we have to follow the fluency where it goes, at the moment we are probably two to three weeks away from a peak."

The deadly 'Aussie flu' – also known as H3N2 – has already killed as many as 300 people in Australia, where the first outbreak is understood to have started.

The strain arrived in Ireland in recent weeks, and according to the HSE "less than 10” Irish people have already died as a result of the outbreak.