TENS of thousands of mourners descended upon Killaloe, Co. Clare, this afternoon for the funeral of Irish rugby legend Anthony Foley.

Former Munster and Ireland player Foley died suddenly of an acute pulmonary oedema in Paris on Sunday at the age of 42.

All radio stations across Munster, and some national broadcasters further afield, united at noon to air The Fields of Athenry in conjunction with the beginning of the Funeral Mass. 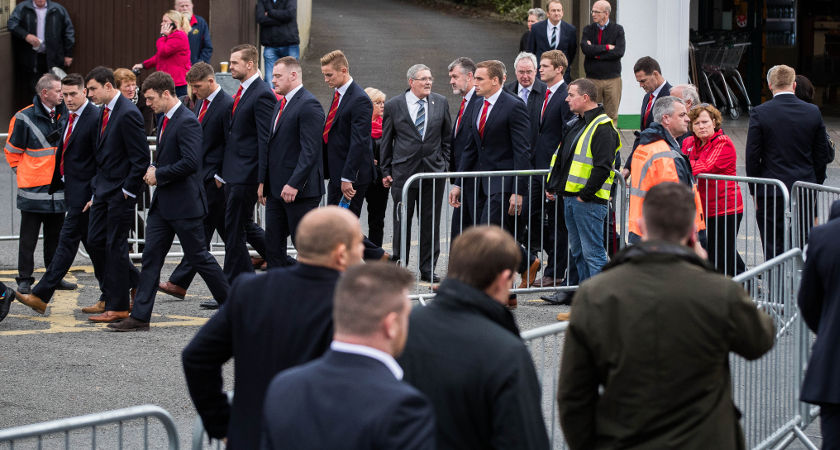 Munster players arrive for the funeral of former Munster Rugby head coach Anthony Foley (Picture: ©INPHO/Ryan Byrne)
Elsewhere, Clare County Council lowered the Irish Tricolour to the half-mast position outside Áras Contae an Chláir in Ennis, as a mark of respect for the rugby icon, who played 62 times for Ireland and made over 200 appearances for Munster.

With the church - which was full 30 minutes before the Mass begun - reserved for family, friends and former colleagues of Foley, the surrounding area of St Flannan’s had attracted mourners from all across the country as the hearse arrived.

Inside, Ireland head coach Joe Schmidt paid his respects, along with a string of Foley’s former international and club team-mates, including Ronan O'Gara, David Wallace, Paul O’Connell and Peter Stringer. 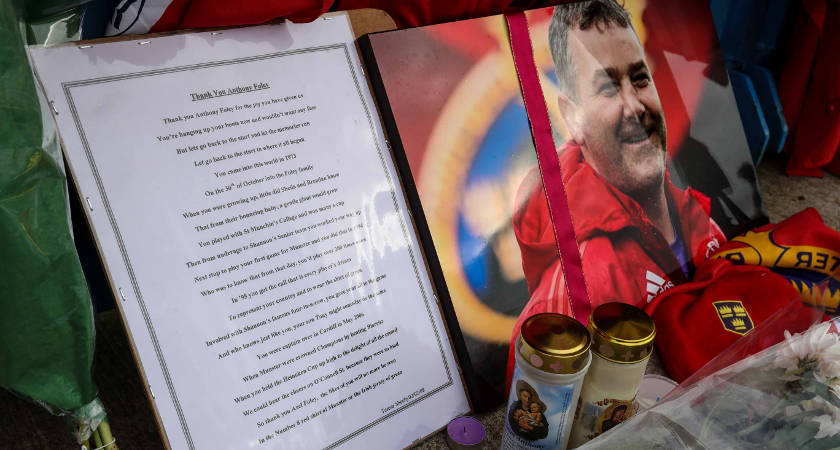 All were members of the 2006 Munster team that won the prestigious Heineken Cup with Foley as captain.

To the right of the alter sat the current Munster squad, with whom Foley was working alongside as their head coach up until his shock passing.

They were joined by another Ireland and Munster legend, Keith Wood, one of the pallbearers on the day having been a close friend. 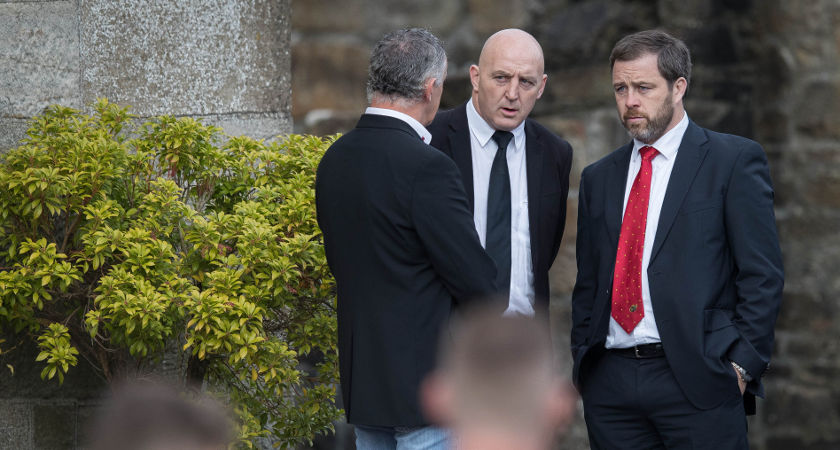 Former Munster and Ireland players Keith Wood and Marcus Horan arrive for the funeral [©INPHO/Ryan Byrne]
Leading the ceremony was Fr Pat Malone, who said: “Axel Foley made many a mark in his 42 short years of life.

"Just look around at the indelible warmth and marks he left on family, on friends, on colleagues, on sports fans.

“To this local community, rugby – whenever it is spoken of – his name will be mentioned, and the warmth of his love and presence will be told of.

“And that’s just to mention a few areas he made his mark in life.”

Anthony Foley is survived by his wife, Olive and his sons Tony and Daniel, who brought forward the bread and wine for offertory during an emotional ceremony.

Following the Mass, he is to be laid to rest at Relig Núa Cemetery, Killaloe.