There was no food or water found with the dogs (Image: COPFS)

A SCOTTISH court has banned a man from Belfast from owning animals for 15 years after six puppies covered in faeces were found in his van.

Stephen McRea, 29, from Belfast, was stopped by police while transporting the six puppies from Northern Ireland to Scotland.

Three of the dogs later died.

McRea was sentenced at Stranraer Sheriff Court on Tuesday after previously pleading guilty to failing to take steps to provide the puppies with food, water or a suitable place to rest during their transport.

McRea was also ordered to carry out 90 hours of unpaid work and will be supervised for a year under a community payback order imposed by the court.

"Stephen McRea's failure to meeting the most basic needs of these puppies and provide a suitable environment for them while they were his responsibility is wholly unacceptable," said Karon Rollo, of the Crown Office and Procurator Fiscal Service (COPFS).

The court heard that on December 3, 2020, at Loch Ryan Port, Cairnryan, police stopped a grey Ford Transit Connect van being driven by McRea after it had disembarked from the P&O ferry sailing from Larne Port, Northern Ireland.

After officers noticed a strong, pungent smell of animal urine coming from the driver's window, McRea told them he was transporting a 'couple of dogs' to a family member in Glasgow.

A search of the van revealed six collie-type puppies in a cage in the load space of the vehicle. 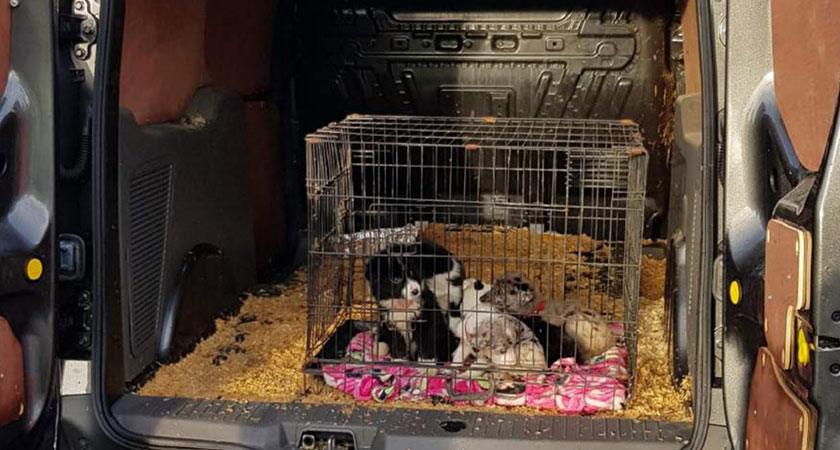 Three of the six dogs found in the van subsequently died (Image: COPFS)

All of the puppies, as well as two blankets in the cage, were covered in faeces and urine.

Meanwhile, the floor of the load space was covered in sawdust and had traces of dried faeces.

The officers found no food or water in the cage or anywhere else in the vehicle.

An examination by veterinary staff found all the puppies were underweight or very thin and all tested positive for the Parvo virus antigen.

Three of the puppies subsequently died.

"I welcome the conviction and sentence in this case," added Ms Rollo, Head of the Wildlife and Environmental Crime Unit at the COPFS.

"We are committed to tackling this type of offending and will continue to work with the Scottish SPCA and Police Scotland to ensure that those who commit such crimes face prosecutorial action."