Belfast woman battling cancer must travel to England for treatment

A BELFAST woman with incurable cancer must come to England to access the drug that will prolong her life.

After being diagnosed with secondary cancer in her leg and lungs in July 2013, artist Nicola Russell has fallen foul of the health ‘postcode lottery’.

In her native Belfast she has been denied access to specialist drugs which are available across England, Scotland and Wales.

"It's shattering to be told that there is a treatment that will help you and prolong your life but you can't have it” she said.

“I don't know how any political party who stands for social justice is not hanging their heads in shame at the situation here. It is unspeakably wrong," she added.

The 50-year-old, who previously recovered from a breast cancer diagnosis in 2007, is now forced to leave her family behind in Ireland while she heads to England to receive the medication – despite being seriously ill.

Her story came to light this week as the Cancer Focus NI organisation launched their three month Equal Access campaign supported by 14 charities in the North.

The plight of Allister Murphy, from Newtownabbey, was also highlighted.

The 57-year-old has advanced prostate cancer and has also experienced the inequality of access to cancer drugs in the North. 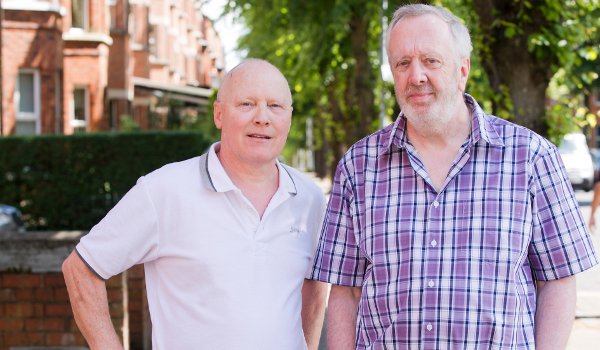 “In 2008 when I was first diagnosed I was given two to three years to live,” he explains.

“By taking part in two clinical trials I benefitted from specialised cancer drugs, that otherwise would have been unavailable to me, and that have added years to my life, but there are other men in Northern Ireland who are still denied access to these drugs.”

“It is so unfair,” he added, “I believe the lack of access to cancer drugs here is discriminatory. It wouldn’t cost a lot of money to improve the system and would make such a massive difference to thousands of people’s lives.”

Cancer Focus NI highlights that there are currently 38 drugs which patients in the North of Ireland cannot access, but which are available through the Cancer Drugs Fund in England.

Chief Executive Roisin Foster said: “We have been concerned for some time that local cancer patients are being denied access to life-extending drugs that are currently available in England and Scotland, and will soon be available in Wales.”

She added: “The purpose of this campaign is to ensure that the most effective drugs will be made available to local cancer patients in their time of need.”

The organisation hopes to secure 10,000 pledges of support for their campaign via email, letters and postcards, which will be delivered to Health Minister Edwin Poots at Stormont this autumn.

Mr Poots has previously confirmed he would consider a £25 'capped' annual prescription charge. But until a decision is made, cancer patients in the North will continue to be denied access to the life-extending drugs on offer elsewhere across Britain.

Ms Foster explained: “The Health Minister has indicated that he will hold a review of the cancer drug approval process in Northern Ireland, which is a move in the right direction. However, patients do not want an open ended review - they want decisive action to improve access to drugs that could extend their lives, improve their quality of life and ease symptoms.”

She added: “There is much work to be done and politicians, patients groups, clinicians and drug companies will need to work together to get the best outcome for cancer patients.”

For further information or to support the campaign visit www.equalaccessni.org.