Belfast , United Kingdom - 11 October 2019; Paddy Barnes after being knocked out by Jay Harris during their IBF inter-continental flyweight title bout at the MTK Fight Night in the Ulster Hall, Belfast. (Photo By David Fitzgerald/Sportsfile via Getty Images)

BOXING PROMOTIONS COMPANY MTK have become the latest outlet in boxing to distance themselves from Daniel Kinahan after the American government imposed sanctions on the Dubliner and his associates .

Bob Arum, the 90-year-old promoter also said he would not be dealing with the Dubliner anymore, while the US government got involved yesterday

MTK Global issued a statement saying it operates ethically, transparently and lawfully and will comply with the American government

The promoters said: "MTK Global will comply fully with the sanctions made by the US government against Daniel Kinahan.

"MTK parted ways with Mr Kinahan in February 2017. He has had no interest in the business since then, and will have no future involvement with us.

"MTK operates ethically, transparently and lawfully. We will cooperate fully with all authorities and assist with any ongoing investigations." 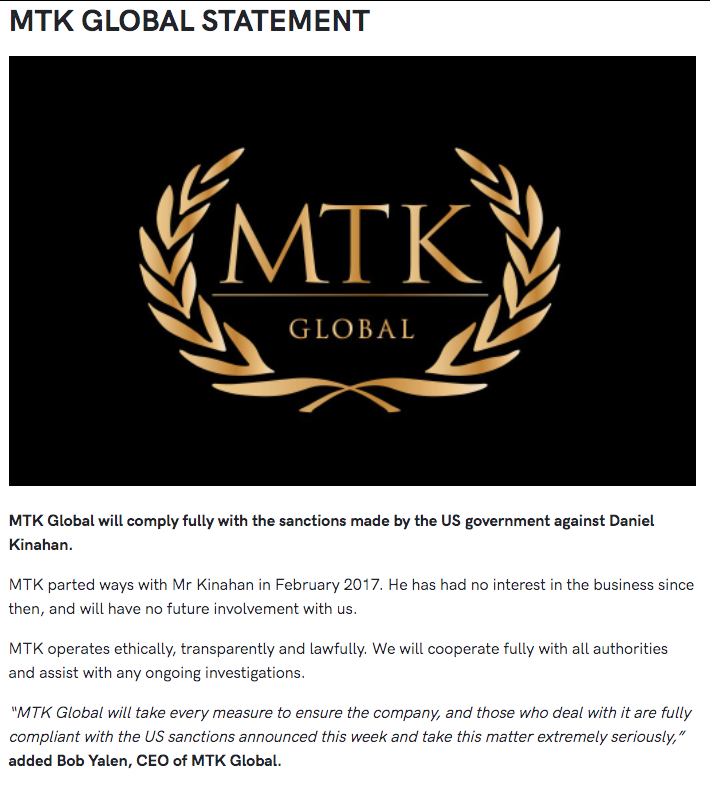 "MTK Global will take every measure to ensure the company, and those who deal with it are fully compliant with the US sanctions announced this week and take this matter extremely seriously."

The US government announced it is offering $5 million for information on the Kinahan crime gang or for the arrest and conviction of its leaders.

The US government department imposed sanctions against seven senior members of the Kinahan crime gang as part of a bid to target their financial operations.

US ambassador to Ireland Claire Cronin told an event at Dublin City Hall that the US department of the treasury is offering a reward of $5 million/€4.6 million for information that will lead to the "financial destruction" of the Kinahan crime gang or the arrest and conviction of its leaders.

While Garda Commissioner Drew Harris warned senior gang members that they can run but "can't hide from justice forever", adding that they will eventually run out of money.

Among those sanctioned by the US department of the treasury's office of foreign assets control (OFAC) were its key members, including leaders Christy Kinahan Snr, Daniel Kinahan and Christy Kinahan Jnr.

The company has high profile fighters like Tyson Fury and Micheal Conlan on its roster.