UNIVERSITY students who dressed in tracksuits and caused disturbances as part of a ‘pikey’ social night have been forced to apologise to the Irish Traveller community.

Students from the University of Reading dressed up as ‘pikeys’ as they set off fire extinguishers, let off fireworks and urinated in residents’ gardens.

The social night was organised by the students from the university's Agricultural Society.

The University of Reading were quick to criticise the actions of the students after the incident last October.

Following an investigation by the university, the society was forced to write a letter to the Traveller Movement apologising for their “unacceptable behaviour”.

The apology features an assurance from the group that it “understands that the term Pikey is offensive to a protected minority under the Equality Act” and that it realises it has “undermined the university’s reputation as an open, inclusive community”.

The letter continues: “We understand that we have offended a vast majority of the University of Reading’s community including the wider student community and even the local community.

“This leads us to apologise further to the local residents that were affected by the offensive behaviour carried out by the society as a whole.

“Members of the committee will thus make it our utmost priority to prevent such behaviour ever happening again.”

The incident is not the first time the University of Reading has attracted criticism for controversial behaviour.

The Agricultural Society caused controversy in 2015 for another themed night out in which members ‘blacked up’ their faces for an ‘immigrant night’, which cost the society its student union affiliation.

A spokesperson for the University of Reading said there had been a “full and thorough investigation” into the behaviour of its students. 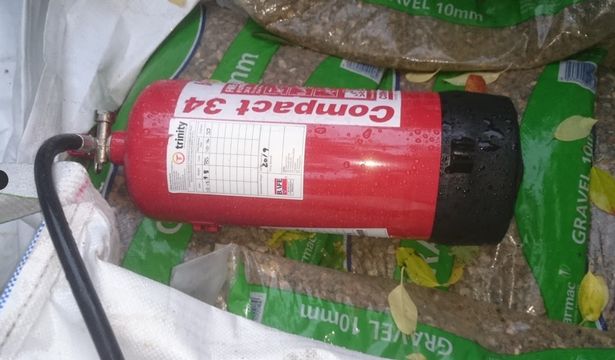 An extinguisher used by the students. Picture: Facebook/John Sharpe

“Students were taken through our disciplinary process and one of the outcomes of this process was a letter of apology to the residents affected by the behaviour and the Romany and Irish Traveller Movement,” they said.

“The university stands for mutual respect, acceptance and understanding. This type of behaviour is unacceptable and does not represent the values of the University, nor the conduct expected of those studying here.

“We want to underline that the University is a diverse and inclusive community where all staff and students must thrive without fear of prejudice."

They added: “The use of derogatory language directed towards any individuals or groups with protected characteristics will not be tolerated.”

In a statement, the Traveller Movement said such incidents made Traveller students afraid to disclose their identities.

"The term 'pikey' is widely recognised as a derogatory term for Gypsies and Travellers, and there is no place for it in an institution that should provide a safe and nurturing environment for all students, regardless of their race or ethnicity," said Traveller Movement CEO Yvonne MacNamara.

"We know that many Gypsy and Traveller students still do not feel comfortable disclosing their ethnicity at university for fear of discrimination.

"So racism against Gypsies and Travellers must be tackled with the same vigour as with any other ethnicity."

The slang term ‘pikey’ is often used as a derogatory term for Irish Travellers, Roma Gypsies and related groups.

The term was famously used by Top Gear presenter Jeremy Clarkson in an episode in 2015, after which the Editorial Standards Committee of the BBC Trust ruled that Clarkson was not guilty of racism.