A MAN has been jailed for seven years after killing an innocent man in an unprovoked one-punch attack in Manchester, England.

Callum Crosbie, 23, of Colebridge Close, Newcastle, was jailed on Friday after being found guilty of manslaughter.

His victim, 60-year-old Kevin Wood, had recently recovered from cancer and had been in Manchester city centre to celebrate his wife's birthday.

Debbie Wood described her husband of 38 years as her 'best friend and soul mate'.

Crosbie's co-defendants, 41-year-old Kevin Doherty and 40-year-old Alan Foster, both from Newcastle, pleaded guilty to affray and were sentenced to four months.

During the trial, the court heard how, on November 20, 2021, the Woods had considered changing their plans to go into Manchester in favour of staying in Middleton after Mr Wood had finished work late.

However, the couple decided to stick to their original plan and went into Manchester, where they tried entering the Printworks complex on Dantzic Street at around 8pm for a birthday meal.

Outside the venue, Crosbie and his friends were remonstrating with security staff after being thrown out of O'Neill's bar for refusing to move from a table. 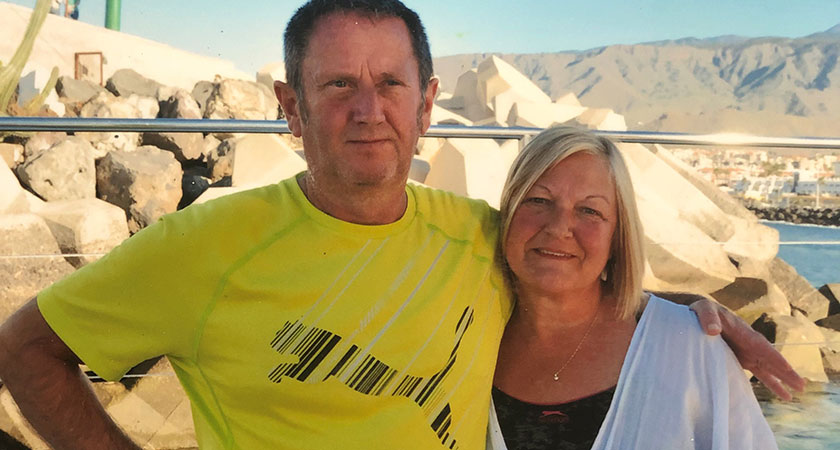 The court heard how the group quickly became violent towards staff, who had formed a line across the entrance of the Printworks to prevent them from re-entering.

While Mr Wood was trying to speak to security staff, Crosbie — who later who tested positive for cocaine — launched his attack.

He kicked and hit security staff before randomly punching Mr Wood to the left side of his face, causing him to fall to the floor.

Security staff caught Mr Wood as he fell and emergency services attempted to revive him, but sadly he was pronounced dead at the scene just after 9pm following the single blow.

Mrs Wood said her life would never be the same after losing her husband.

"Kevin was a hard-working man, he gave us absolutely everything we ever wanted," she said.

"He had a fantastic sense of humour and he'd have you in stitches laughing. He was my soul mate, my best friend and my husband.

"We'll never get over it — our lives will never be the same. It's absolutely crazy that one punch can do so much damage to a person and a family.

"It was like it was yesterday, I wake up every day thinking I'm dreaming and expecting Kevin to come in.

"It's been absolutely heart-breaking for all of us as a family and no doubt for Crosbie's family too."

She added: "I've now got a daughter who hasn't got a dad, and all of the milestones in her life she would have shared with her dad she'll now miss out on.

"He'll never be able to watch her down the aisle. It's heart-wrenching.

"These kind of assaults have got to stop."

She added that she still struggles to cope with the decision not to change their plans for going out that night.

"To this day, I regret not staying in Middleton and I wish I stayed there as he might still be here with us now," she said.

"He was a loving husband, best friend and soul mate.

"He was a dad to not only his daughter, but a stepdad, grandad, brother and uncle and we're all still devastated."