IRELAND FOOTBALLER James McClean has defended his recent controversial Instagram post where he was pictured wearing a balaclava.

The Stoke City winger, who described the photograph as a "lighthearted joke", was fined two weeks' wages by his club and was asked to delete his Instagram account.

The image showed McClean in a balaclava with his two children, with the caption: "Today's school lesson - history".

It was interpreted as an ill-advised reference to the IRA, and the photo received a swarm of online criticism, and McClean's brother claimed death threats had been aimed at the winger's children.

In an interview with Sky Sports, the Derry-born Irishman expressed his regret over the post, but asked why he couldn't make a joke when others make jokes about him.

"If I sat here and said I don't regret things I'd be lying but I can take a lot of abuse and can't have fun back? 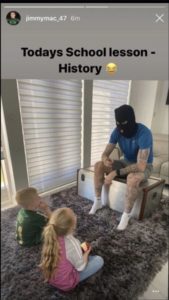 "It was supposed to be a lighthearted joke but I can understand why it didn't go down too well," McClean said.

"People think I did a history lesson like that but I didn't actually do it.

"It gets annoying when things like that gets all this coverage. When I breathe or look the wrong way there is an article. People get their perception from things like this."

Following the initial post, McClean apologised in an official statement.

"I never wanted to cause any offence but I now I realise I did so and for that, I apologise unreservedly," he said.

The Irishman has caused controversy in the past over his stance on refusing to wear a remembrance poppy, and has been subject to Sectarian abuse during football matches in England.