Chasing Jeremy Corbyn: Where does the Labour leadership front-runner stand on Ireland and the big issues?

IT’S a depressingly cold evening in Hedge End near Southampton.

High-spec cars roll in and out of the Hilton hotel on the edge of town. On the footpath union representatives distribute free-sheets headlined with socialist banners.

Inside, the front runner for the Labour leadership, Jeremy Corbyn, is shooting the breeze with his campaign team.

In mornings to come his momentum will be routinely tested, further scrutiny of his policies. More questionable political associations? But will they halt his gallop?

“The establishment are s****ing themselves,” says one of the free-sheet distributers. “They don’t know what to do. The ruling classes have all the power and they’re worried it’s going to slip back. Definitely.”

Another union rep chips in. He explains that efforts to slow Corbyn’s momentum are not working when measured against turnout at his events.

Organisers had estimated a crowd in excess of 800. But interest in attending topped 1,000 they say.

The previous evening’s event in Cambridge had to be cancelled because too many people were expected and the police had safety concerns.

“This is probably one of the biggest political rallies in the south in years,” says the defiant member. “People have come out because they want to hear what he has to say, the promise of a job, the promise of a house.”

But is the rise of Jeremy Corbyn inadvertently bolstering the Tories? Might his brand of politics consolidate those positioned to the right?

And while we’re at it, has Britain not seen this brand of politics before?

“Yeah, and we got the NHS out of it, affordable council housing out of it, free education,” says the union rep.

Inside, the MP for North Islington nibbles on a bowl of chips, poses for photographs and moves easily between reporters and supporters.

It’s all very easy. But then Corbyn’s an old hand.

He has often been at odds and even voted against his own party while he famously established a dialogue with the IRA through a time when the British establishment shivered at the very thought of it. 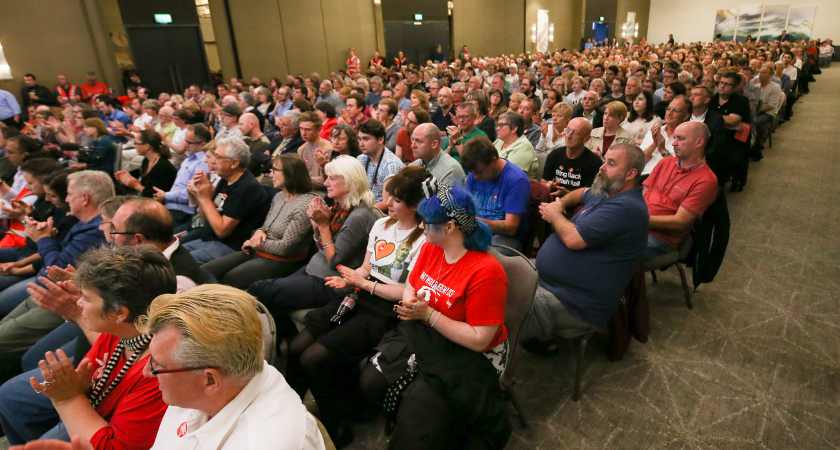 His press handler interrupts to bid for a moment of his time.

“Only a couple of minutes?” she says. Corbyn waves a welcome to approach.

Throughout the campaign the economy has been a key battleground. The front-runner has received the backing of respected economic figures and has been pilloried by the politics that says he and his ideas won’t work.

Later, and to much mirth, he explains: “They’ve been doing this kind of stuff in Germany for years.”

So with just time for one question...what are his thoughts on a possible Brexit under the Tory Government from an Irish trade point of view?

“Well, I’d hope there wouldn’t be any break in trade between Britain and Ireland,” he says.

“Britain and Ireland will be forever close. I’m well aware of all the history of Ireland and I represent a constituency that is very large number of Irish people and I’ve spent a great deal of time in Ireland.

“I was in both Dublin and Belfast as part of this campaign so there is always going to be a closeness to the relationship and the free movement of trade and people’s goes back to 1949...”

And then he’s off, chips eaten, bound for the stage and a rousing speech that triggered applause after applause.

He was doing a decent turn in comedy too.

“My name was put forward and it started with a huge swing when 11 colleagues nominated me and that was very nice, and following day there was a huge increase when it went up to 12 as I nominated myself and after that it grew quite slow.”

And at the end of it all a winning message - on this night and for this audience at least.

“What we are doing is opening up a democratic process,” he declares.

But if it was a night of gains, there were speckles of scepticism.

“The swell has led us to look more at the person than the policies,” says one student stood smoking outside.

This is something Corbyn refutes.

“It’s all about policy and all about peo ple,” he says when asked to explain the momentum propelling him along. “It’s not about personality at all.” 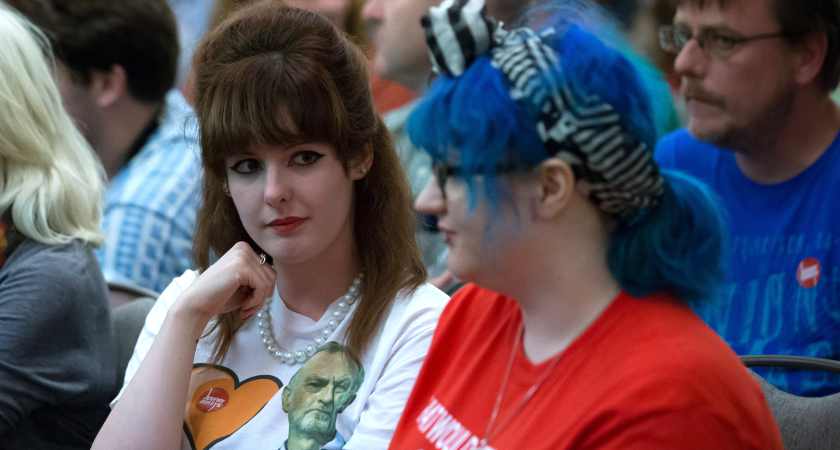 Typically divisive and in fitting with the politician, opinion is split on Corbyn’s X factor, though words like honesty and principal echo again and again.

“It’s an opportunity for a fresh start,” says one man in his 70s. “If Labour has done this brand of politics before then I haven’t seen it.”

And with social equality, healthcare, the future of the NHS and fairness for all, at the top end of his mandate, there is little doubt his message is engaging older and disaffected groups within his ‘Irish’ constituency.

But can he maintain momentum? Can he win?

“I don’t think he can,” says the student. “But I think he is making a lot more people talk and think.”

“All suggestions are he will,” says the Union Rep. “It’s a case of what will happen then? We’ll have a fight to defend jobs and services over the summer.”

And as for the departing taxi driver, a self-confessed Sun and Guardian reader, he says: “Well, I don’t think he’ll have enough support if he gets in to form a government. I think you need to be cen- tered closer to the middle.”

But is the case that his appeal is rooted in the fact he’s not?

One of these four will become the next Labour leader on September 12... 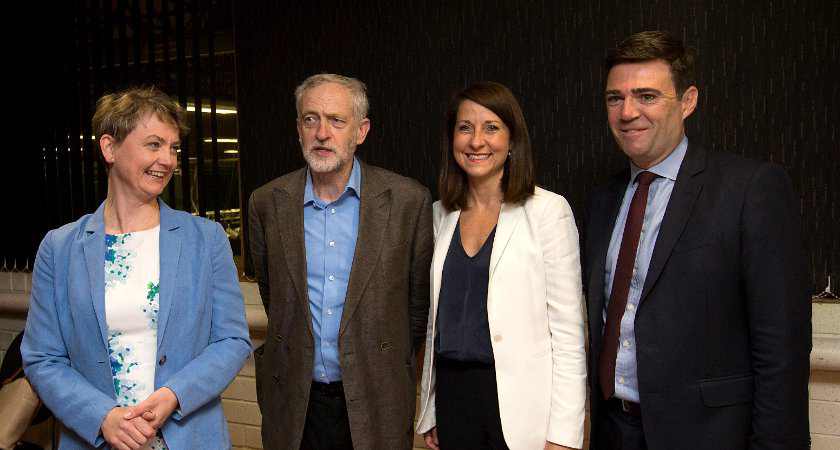 The Labour MP for Leigh since 2001, Andy Burnham served as health secretary under Gordon Brown and previously as culture secretary and chief secretary to the Treasury.

He stood for the leadership in 2010 but lost to Ed Miliband, going on to hold the shadow health brief. Mr Burnham says he’ll widen Labour’s appeal by taking the party out of the “Westminster bubble” and has a vision of helping “everyone get on in life”.

He also pledged to take a tougher opposing line on the Government’s welfare reforms.

Mr Burnham is married with three children. Before he entered politics he worked for a newspaper and a publishing company.

Another former chief secretary to the Treasury — as well as a work and pensions minister under Gordon Brown — Yvette Cooper has been shadow home secretary for the past four years.

The MP for Pontefract and Castleford did not stand to succeed Mr Brown in 2010 — her husband Ed Balls did.

Announcing her bid this time, she said: “Our promise of hope wasn’t strong enough to drown out the Tory and UKIP voices of fear. That’s what we need to change.”

Ms Cooper and Ed Balls have three children. She worked as a journalist prior to her political career.

Shadow health minister Liz Kendall was the first Labour MP to say they wanted a crack at the party’s top job, saying a “fundamentally new approach” was needed.

First elected to Parliament in 2010 as MP for Leicester West and appointed to the shadow front bench the same year, Ms Kendall is seen as a Blairite contender.

She is a former special adviser to Harriet Harman. She has previously spoken of the importance of family and her desire to improve the education system for future generations.

“I’ll never forget the debt that I owe my parents, the teachers who guided me, and university lecturers who inspired me,” she said in a constituency speech earlier this year.

The veteran left-wing MP for Islington North entered the contest to get an “anti-austerity” voice into the debate on Labour’s future.

The 66-year-old told his local newspaper, The Islington Gazette, he had decided to stand in response to an “overwhelming” desire among Labour members for a “broader” range of candidates.

Mr Corbyn, who is promising to protect public services and increase taxes on the wealthy, was seen as a rank outsider, but support for his candidacy has risen significantly.

His campaign has received trade union backing, with Unite and Unison - Britain’s two biggest unions  - among those endorsing his candidacy.

Mr Corbyn has been married three times and has three children with his second wife. He used to be a trade union organiser and a councillor in Haringey, London.