AS rugby fever is about to sweep the nation, you'll find everything you need to know in this week's Irish Post Rugby World Cup special souvenir edition - complete with a team poster and free tournament wall chart.

With England hosting the tournament this month and next, we have a talented crop of our own in Joe Schmidt’s Ireland.

The competition will be on your terrestrial screens from September 18 to October 31, so get ready to embrace it and get behind our boys in green.

There’s no doubt this squad is the best Ireland have had since 2007’s underachievers, and there’s genuine belief that a mark can be left this time around.

You don’t have to have tickets to the games to become engrossed in the event either.

From New Zealand’s pre-game ritual the haka to the drama of the television match official overruling the referee on the pitch, there’s a lot to admire about rugby from the comfort of your own home. 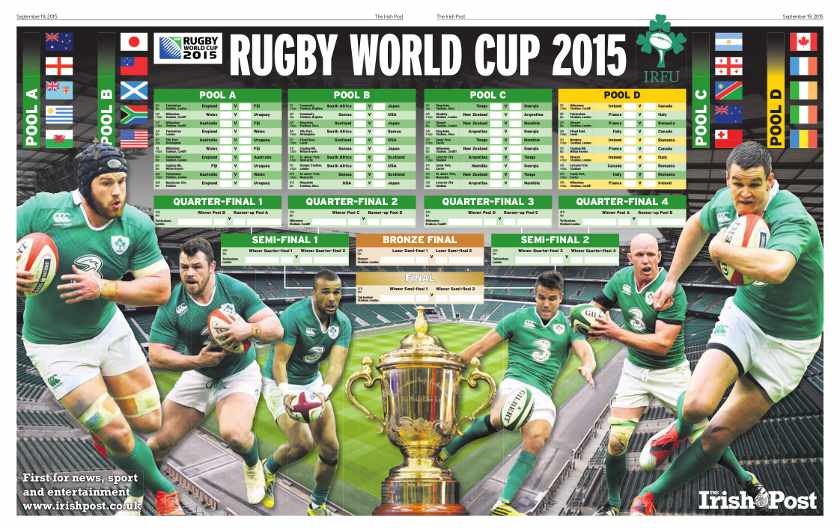 And for the complete rugby novices among you, we’ve got coverage in the week’s edition to suit all needs.

You’ll find our basic breakdown of the main rules of the game, Ireland’s five key players on page 30, a little bit of history thrown into the mix and a FREE wall chart to track Ireland's progress throughout the tournament.

So pick up your copy today and get yourself primed one of sport’s marquee events.

The Irish Post is available throughout Britain and also in selected outlets in Ireland. It can be found in over 20,000 retail outlets including Sainsbury’s, Morrison’s, Tesco, Waitrose, WH Smith, Asda, Spar, as well as thousands of independent retailers. Pick up your copy in store today.