The Wolfe Tones' Irish rebel anthem Come Out Ye Black and Tans has shot to the number one spot on the iTunes charts in Ireland and the UK, seemingly as part of a unique campaign to protest against the planned commemorations of the RIC and DMP, which was cancelled due to public backlash.

The live version of the fenian track surpassed Maroon 5, Lewis Capaldi, Dance Monkey, Endor and Dua Lipa as it rocketed through the charts overnight, and at one point two versions of the song held the top two spots. 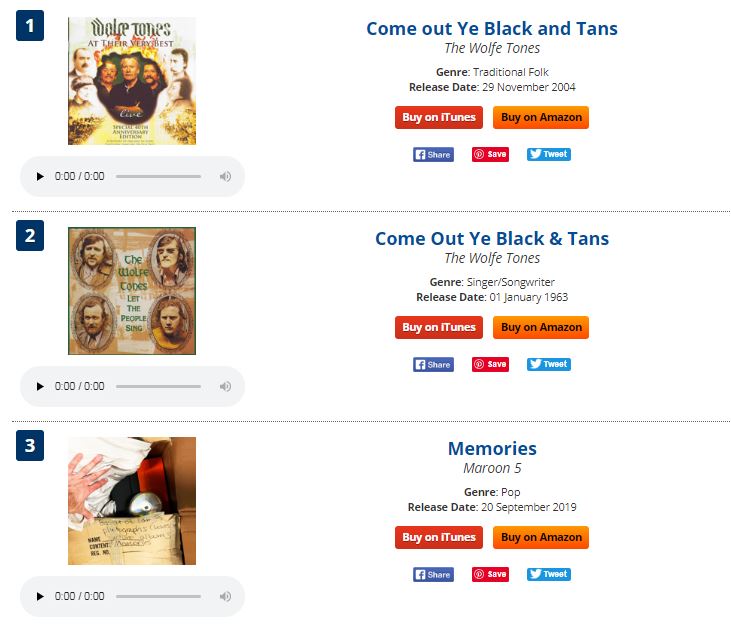 Both the studio version of Come Out Ye Black and Tans, from the album Let The People Sing, along with the live version, held both the number one and the number two slots in Ireland, forcing other chart-toppers to drop significantly.

Upon learning of their song's number one status, The Wolfe Tones said "Fine Gael got their answer", referencing the planned commemoration of the RIC by the Fine Gael government.

Fans took to Twitter to celebrate the succesful campaign...

While others who were fairly oblivious still got to experience an unreal song.

I’m not sure why it’s all of a sudden so popular, but that Come out ye Black and Tans song is pretty good isn’t it?😁

The song is currently selling more than double the amount of copies than Justin Bieber's new track, Yummy.