Mayor of London Sadiq Khan was among the guests on what was an incredible night and gave an inspiring keynote speech.

"The Irish community has helped enrich London's social fabric over many generations," he said. "Look around the world, you see the positive influence Irish emigrants have had on communities." 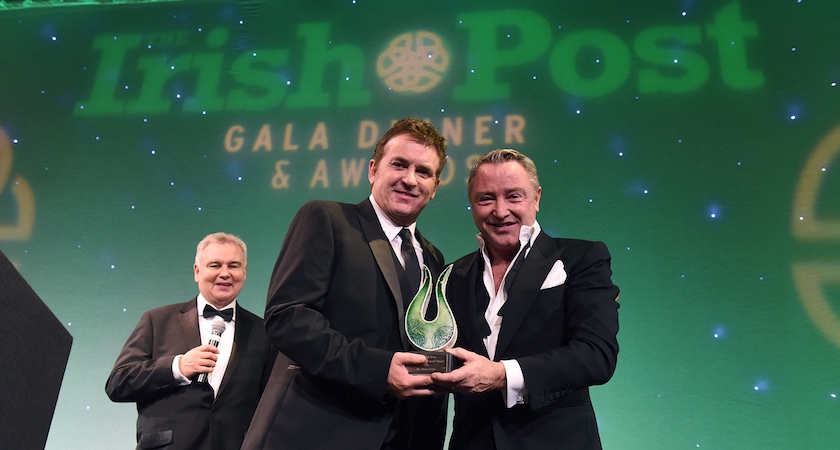 A total of six awards were presented on the night honouring successes in sport, business, entertainment, construction and community.

Picking up the Entertainment Legend Award was EastEnders actor and TV favourite Shane Richie, who said: "We're all Irish tonight. My dad used to run Irish clubs and if he was looking down on me tonight he'd be really proud."

Hosted by broadcaster Eamonn Holmes the Outstanding Contribution to Sport Award was presented to Republic of Ireland manager Martin O'Neill, who was joined on the evening by assistant manager Roy Keane.

O'Neill spoke of how honoured he was to receive the award, and also paid tribute to Keane. "He's everything and more I thought he would be," he said. 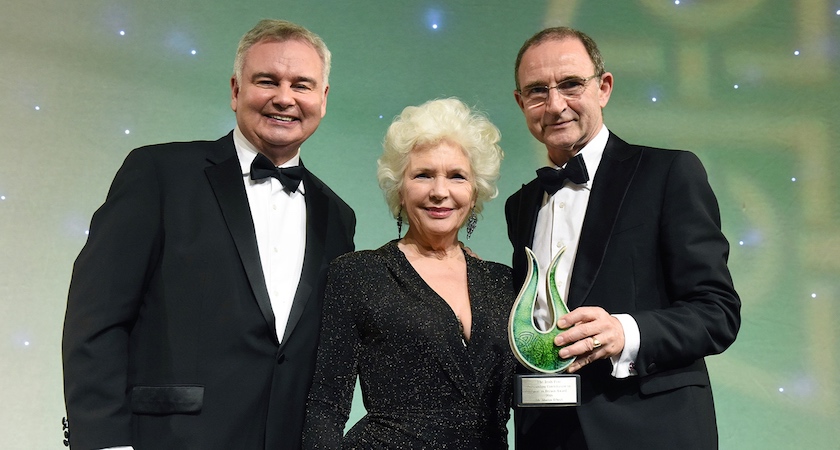 A surprise music and dance act on the evening saw Flatley's Lord of the Dance troupe, led by Manchester Irish dancer James Keegan, take to the stage for two rousing performances finishing with a spectacular pyrotechnics display. 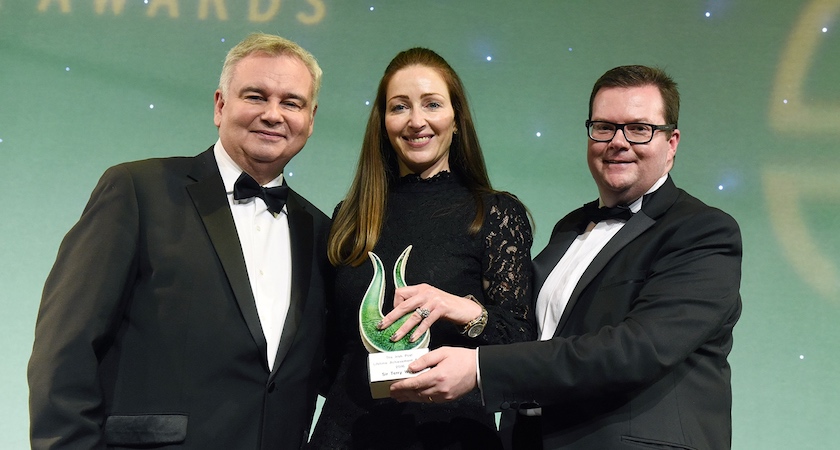 In what was a more reflective part of the night, the late Sir Terry Wogan was posthumously honoured in recognition of his incredible contribution to broadcasting, the Irish community and life in Britain.

Speaking to host Eamonn Holmes, Sir Terry's daughter Katherine Cripps, who accepted the award in memory of her father, said: "Tributes like this allow us to remember him for all he achieved."

Held in the Great Room at the Grosvenor House Hotel on Park Lane, London, the awards ceremony was broadcast live on Facebook to thousands of people across Britain and the world. 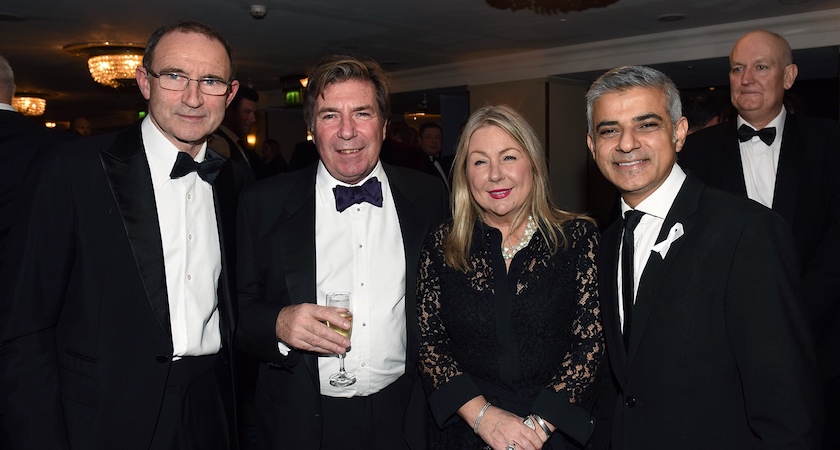 An Award for Outstanding Contribution to Business in Britain was presented to Leicester City FC CEO Susan Whelan, who regaled guests with the incredible story of the team’s fairytale Premier League title win last season.

Welcoming guests on the night, The Irish Post publisher Elgin Loane spoke passionately about how the Irish have contributed greatly to British society.

"Emigrants want to contribute to their new home, that is what you see tonight," he said. "The Irish will be building Britain for many years to come." 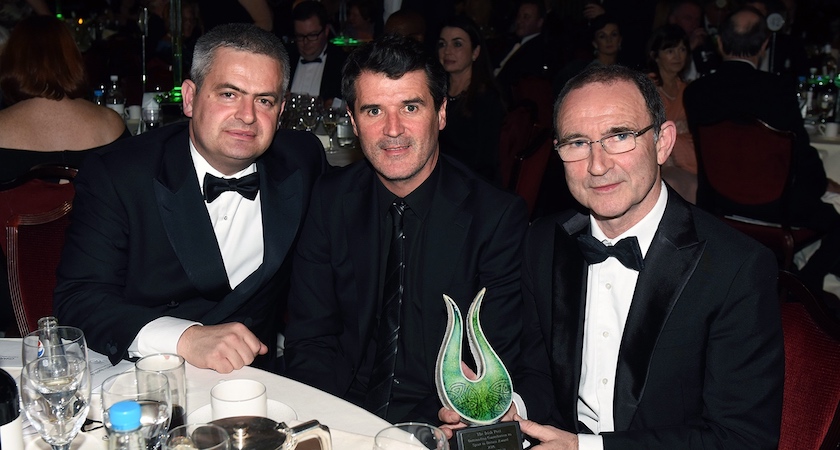 The winner of the inaugural Building Britain award was also announced, with The Carey Group emerging as winners from a shortlist of four finalists. 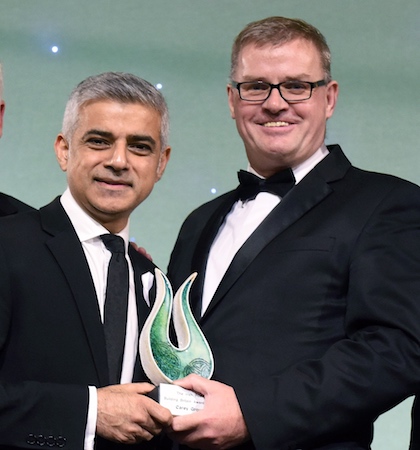 But the biggest round of applause of the evening went to the 2016 Community Award winner, Agnes Forde.

Agnes, 93, was honoured for her work with Irish Community Services in London where she was elected as its first president.

Born in Kinsale, Co. Cork she moved to Britain in 1947. She spoke about the loneliness she encountered in those early years but how she soon grew to love her adopted home.

She later became involved in the parish of the St John Fisher Catholic Church in Kidbrooke, where she has remained active as a cleaner, choir member and funeral caterer over the years.

Agnes is also currently the president of the Greenwich Irish Pensioners’ Association, which meets twice monthly in Woolwich to socialise and organise events for their members.

"Who would have thought that someone like me would come up on this stage tonight and win this award," said the humble and deserving winner.

Editor-in-Chief Siobhan Breatnach described how The Irish Post is celebrating 46 years as the biggest-selling newspaper to the Irish in Britain and now reaching a new generation of people around the world online.

“Today we've got a website connecting us to a global audience, which means people from the US to Australia are joining in the stories here in Britain but also sharing theirs as well."

The Lighthouse Construction Industry Charity benefitted from a raffle held on the night, with proceeds going to the charity that provides emergency financial support to the construction community.

The Irish Post’s InBusiness 2016 magazine, the annual publication is a go-to directory of Irish leaders, connectors and influencers in Britain, was also launched.

The Irish Post Awards 2016 were sponsored by Allied Irish Bank GB and The Color Company.

The Irish Post is the biggest-selling national newspaper for the Irish in Britain and is now a global online Irish news site.