Connemara church destroyed by vandals causing €70,000 worth of damage

A church in the remote village of Errislannan in Clifden, Co. Galway was decimated last night by vandals in what Archbishop Michael Neary is referring to as “an act of persecution against all Christians”.

A Garda technical team is investigating the circumstances whereby the contents of a Church of Ireland church were almost completely destroyed by vandals.

Gardaí are seeking the help from the public and the community in this secluded part of North Connemara in an attempt to establish who is responsible for the vandalism.

The damage included the church bible being thrown throw a window, the pulpit being split in two, the altar rail completely ripped from its fixings and thrown through the east window of the church and all lights being smashed.

As well as this, and perhaps most damaging of all, was the church organ being smashed beyond repair. 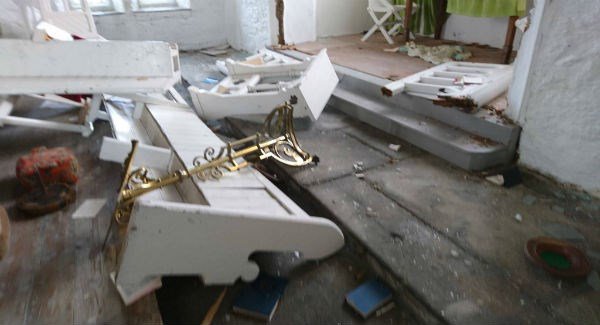 The pew and church seating strewed across the floor. (Picture: Irish Examiner)

The Holy Trinity church is part of the Omey group of Church of Ireland churches and has not been in use for the past four weeks, which resulted in the damage not being identified until yesterday.

Archbishop Michael Neary views the attack as a sinister act, and believes it is not just an act of material destruction but also the destruction of the principles of Christians the world over: “Over the last 12 months there has been high profile media coverage of the desecration of Christian churches in Iraq and in the Philippines.  These actions are a physical threat to worshipping Christians anywhere in the world.”

Despite the massive setback for the parish, Reverend Stan Evans says the community will bounce back and defy those who damaged their beloved church.