WHAT a night for The Boys in Green.

After a disappointing performance against Belgium, Martin O’Neill decided to ring the changes for what was a must-win match against the Italians, and the players responded with a brilliant performance.

The six changes made by O’Neill ran through the spine of the team and were brave moves considering the importance of the match, although the Italian changes no doubt helped as well with many of their key performers rested.

From the first whistle, the Azzurri were on the back foot as Seamus Coleman set the tone with a tackle reminiscent of Roy Keane's against Marc Overmans in the do-or-die game against the Dutch at Lansdowne Road en route to the 2002 World Cup.

The energy and tempo was ferocious. It was allied to guile and Ireland got their just reward with a late, late winner courtesy of Robbie Brady after good work from the effervescent Wes Hoolihan.

Looking ahead, Ireland have a last 16 tie with hosts France, who will be wary of playing us as they will be the overwhelming favourites, whilst we have nothing to lose at this stage.

The French have flattered to deceive and their manager Didier Deschamps has changed his formation and players in every match so far in the pursuit of a winning formula.

Yet their performances have been mixed with unconvincing wins over Romania and Albania, as well as a goalless draw against Switzerland.

Ireland go into the game in high spirits whilst France will be unsure of what formation or players to go with, although they have match winners Ireland would kill for.

Dimitri Payet and Antoine Griezmann are lethal on the ground whilst Oliver Giroud provides an aerial threat which Ireland struggled with against Sweden. 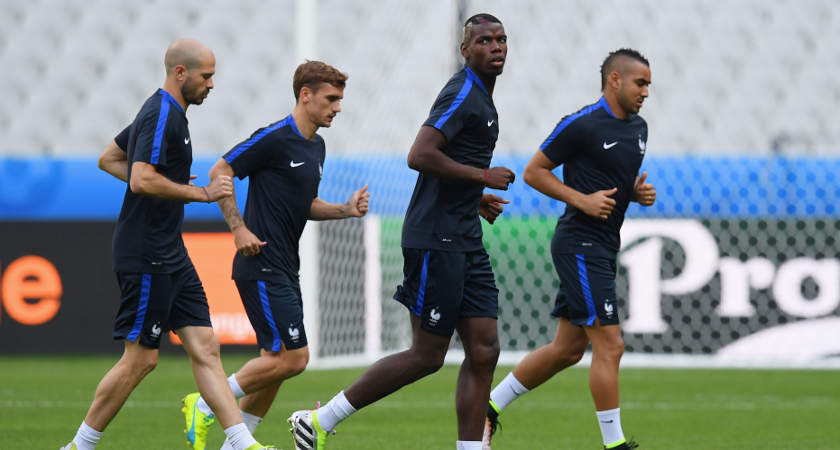 Dangermen: Christophe Jallet, Antoine Griezmann, Paul Pogba, Dimitri Payet [Picture: Getty]
In our favour, we have the pace of Shane Long allied to the trickery of Robbie Brady and Wes Hoolahan and our best hope is to match the French side in formation and keep close tabs on the aforementioned players.

The period between matches is so important now. I remember between matches in the 2002 World Cup, we would be allowed some free time to see our families or go out for the day to break the week up.

I remember going on the Japanese underground with Kenny Cunningham and Gary Breen and we spent most of the day lost, but it was good to get out and about.

At this stage, very little training is done. It’s about recovery of body and mind as they will need all their energy against the French, and you don't want to leave anything to chance on the training ground.

If I was Martin O’Neill heading into the pre-match press conference, I would want to be planting seeds of how we were denied a penalty on James McClean against Italy and how we were robbed by a handball last time against the French.

This way, when the referee hears those words ringing in his ears – that little old Ireland never get anything – that builds a siege mentality. It’s what Jose Mourinho is famous for.

In a knock-out game, anything can happen so let’s hope every eventuality is planned for.

Against Sweden, once we went 1-0 up, Ireland could have looked to shore things up at the back by playing a back three, as Italy have done.

This may be the plan for O’Neill, and that will mean penalties will be in the back of his mind.

Penalties are important to prepare for, with the order of paramount importance; you have to have your best takers up first with a clear strategy on the routine.

Now is the time where O’Neill and his staff come into their own, with plenty of time to plan before the match on Sunday, and I hope The Boys in Green put in another stellar performance to make us all proud.