CONOR MCGREGOR has called out WWE boss Vince McMahon on Instagram in a possible tease of his next career move.

The former UFC world champion, who retired from the Octagon last month, posted a photo of himself holding both his UFC title as well as the WWE Championship on his shoulders to his Instagram story.

In the post he wrote the caption: "McGregor vs McMahon CEO Flashmatch."

It isn't the first time McGregor has flirted with the idea of fighting WWE wrestlers. 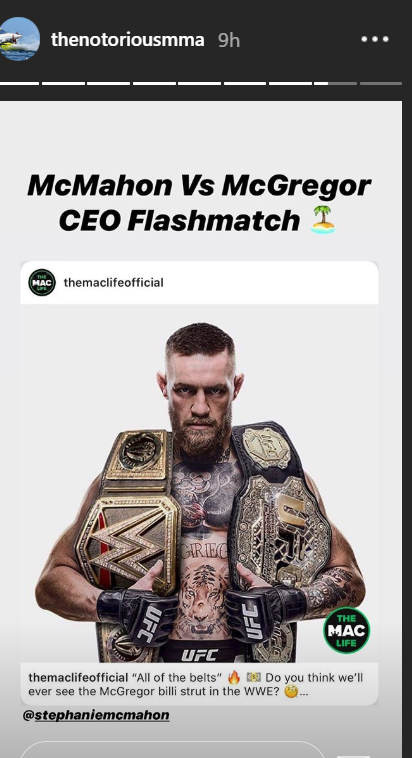 He's also been accused of stealing Mr McMahon's famous walk, a strut McGregor pulls out at before his fights start.

Ronda Rousey made her WWE debut in 2018 after a number of years at the top of UFC.

Floyd Mayweather, who fought McGregor in 2017, made an appearance at WWE's Wrestlemania in 2008 to face The Big Show, while fellow boxer Tyson Fury fought WWE star Braun Strowman last year.

Whether this teasing has any substance or if McGregor's just having a bit of fun, the Irishman, with his blend of arrogance, charisma and ability to fight, would be an absolutely perfect in the world of professional wrestling.