Patsy Byrne honoured for his service to the Irish in Britain

LATE construction boss Patsy Byrne has been recognised for his service to the Irish in Britain.

The Kerryman, who passed away last September, was named as the winner of this year’s Forgotten Irish Award by the Ireland Fund of Great Britain last night.

CEO Sheila Bailey presented the award to Mr Byrne’s son Michael at London’s Irish Embassy, and he said the family was “extremely proud” to learn of the honour.

“From an early age my father stressed to us how important it is to ‘look after your own’,” he told The Irish Post.

“He never forgot that to get where he was in life he needed the support from the Irish community when he arrived in England and throughout his career; he reminded us often that all of us at some point in our lives need a helping hand.”

Presenting the award on the night Ms Bailey explained that that Patsy “was a man who lived his values…brought employment and security to thousands of our countrymen who arrive here to make a living…and his support for a wide number of causes and charities improved the lives of many more.”

In his address the evening’s host, Ambassador Dan Mulhall, praised Mr Byrne for coming over to London with nothing and creating a company that has helped and supported generations of Irish people living in London. 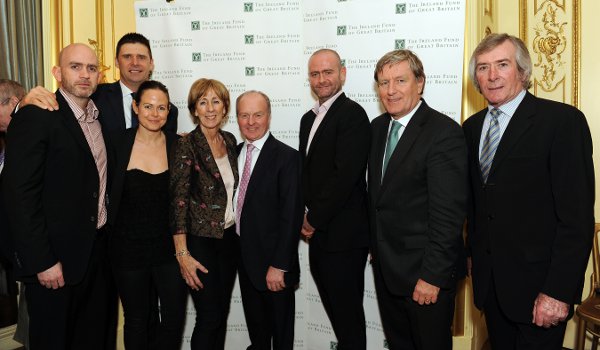 The Forgotten Irish Award is presented annually by the Ireland Fund of Great Britain.

It is given to an individual or organisation for “outstanding service to those who emigrated to Britain in the second half of the 20th century to escape hardship, marginalisation and all too often the abuse of international life”.

As well as co-founding the Byrne Group, a construction and engineering giant that has employed vast numbers of Irish people, Mr Byrne was a regular at Irish charity events in Britain.

He was also a champion of industry charities including the Construction Youth Trust and the Lighthouse Club.

Mr Byrne died suddenly at his home in Co. Kerry on September 30.

Michael Byrne, who has taken over his father’s position as CEO of the Byrne Group, said the family has received a “breathtaking” response from those who knew Patsy since his passing.

“It has been a great source of comfort to us to know so many people respected and admired him as much as we did,” he said.

“He [Patsy] may be gone but he will never be forgotten.”

Irish Government Embassies across the world rack up over €100,000 spend on St Patrick's Day festivities