A GRAVEYARD in County Cork has been the target of vandalism and desecration for the third time in just over six months.

St Catherine's cemetery in Kilcully, north Cork, was targeted by thugs for the third time earlier this week as vandals smashed a number of grave markers, damaged statues and attempted to knock gravestones over.

The graveyard had previously been targeted in October and again in January.

Local outlet Cork Beo spoke to one woman, Sharon Ahern, who was devastated to learn that her father's grave had been targeted.

"The hands from the Our Lady statue were missing, they had been clean cut off and the face was all chipped," she said.

MORE VANDALISM AT KILCULLY - Mick is speaking to Anthony whose father's grave has been vandalised in Kilcully. The our lady statue had her hands clean cut off & the face is all chipped. The family are heartbroken. He says the gates of the Graveyard should now be closed at night. pic.twitter.com/rekYX3Ty7R

"We went out and all the cement around the base of the statue was damaged."

"We had a walk around and we found Our Lady's hands two or three plots down from the grave."

"My father is out there 25 years and we have never had anything like this."

CCTV was set up in the graveyard in January after a number of graves were partly destroyed, but it appears the thugs were aware of a blind spot in the CCTV and targeted a grave which was covered by trees.

The attack in January left up to 20 gravestones vandalised and destroyed, with photographs of the sick attack showing entire gravestones knocked over, statues decapitated, grave ornaments broken and empty alcohol bottles littering the scene.

Major damage took place in St Catherine's cemetery, Kilcully again this morning. About 20 headstones were destroyed. We have been in contact with a number of families who have loved ones buried in the Graveyard.

Have your family been impacted? pic.twitter.com/zgIL7hYy02

Speaking at the time, one woman whose mother's grave had been targeted spoke of the devastation her family were suffering, saying "I hope the scum that did this never sleep well again at night as long as they live. 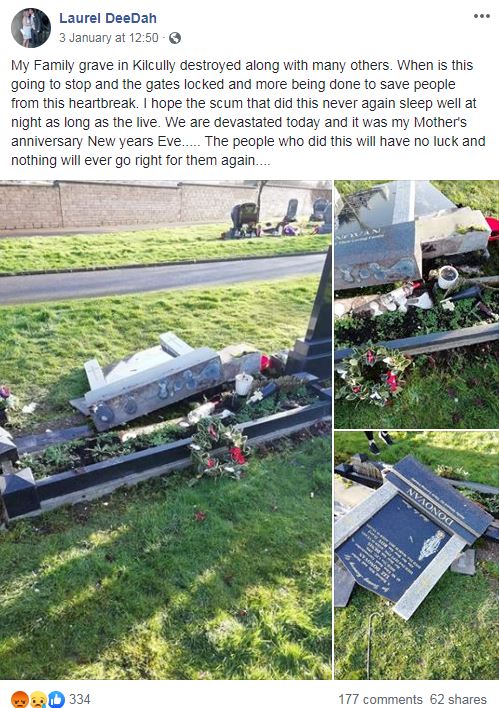 "The people who did this will have no luck and nothing will go right for them again."