People wearing protective suits walk from the Diamond Princess cruise ship, with around 3,600 people quarantined onboard due to fears of the new coronavirus, at the Daikoku Pier Cruise Terminal in Yokohama port on February 10, 2020. - Around 60 more people on board the quarantined Diamond Princess cruise ship moored off Japan have been diagnosed with novel coronavirus, the country's national broadcaster said on February 10, raising the number of infected passengers and crew to around 130. (Photo by CHARLY TRIBALLEAU / AFP) (Photo by CHARLY TRIBALLEAU/AFP via Getty Images)

THE NUMBER of people to have died from coronavirus stands just short of a thousand as of Monday with the total number of confirmed cases standing at just over 40,000.

97 people in China have died as a result of the deadly virus in the last 24 hours alone, bringing the total death toll to 908.

The number of people diagnosed with the disease in the UK doubled to eight after four patients tested positive for the virus.

It comes as the government issued new powers in England to keep people in quarantine to stop the virus spreading.

In order to do this the Department of Health has described the coronavirus as a "serious and imminent threat" to public health.

The overall risk level to the UK remains "moderate". 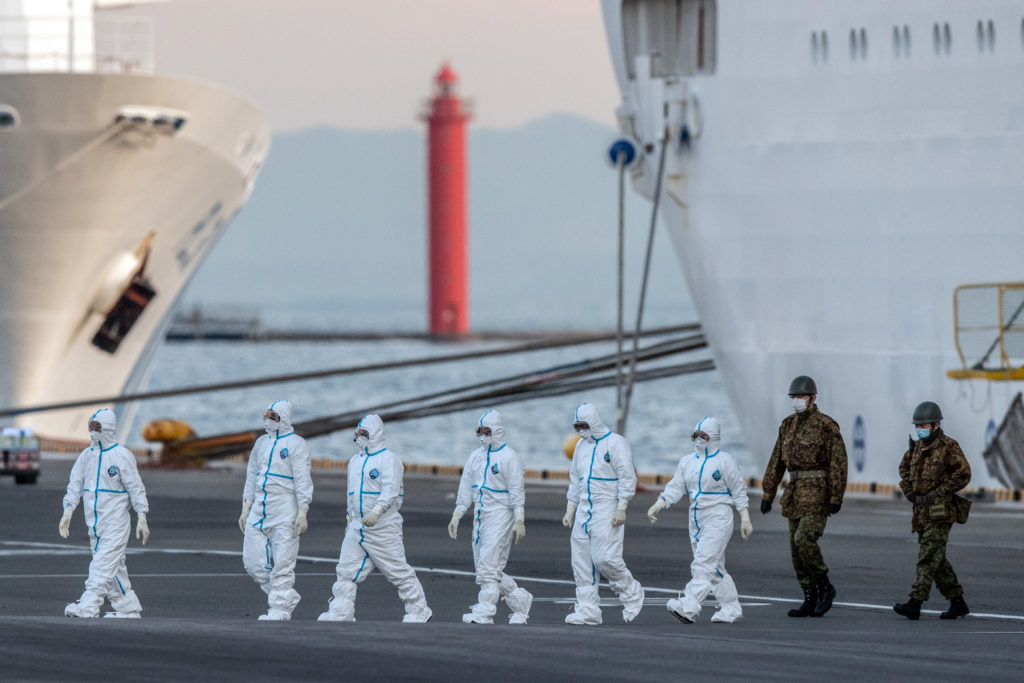 YOKOHAMA, JAPAN - FEBRUARY 10: Japanese soldiers and emergency workers in protective clothing walk from the Diamond Princess cruise ship at Daikoku Pier where it is being resupplied and newly diagnosed coronavirus cases taken for treatment as it remains in quarantine after a number of the 3,700 people on board were diagnosed with coronavirus, on February 10, 2020 in Yokohama, Japan. 70 passengers are now confirmed to be infected with coronavirus as Japanese authorities continue treating people on board. The new cases bring the total number of confirmed infections to 96 in Japan, the largest number outside of China. (Photo by Carl Court/Getty Images)

The new cases are all linked to a British man who caught the virus at a conference in Singapore and travelled to a ski resort in France. He was diagnosed in Brighton, and is being treated at St Thomas' Hospital in London.

He is also linked to the fourth UK patient, who was exposed to the virus in France, while five British nationals tested positive in France following his trip to the ski resort.

A whopping 3,062 new cases of the virus were confirmed around the world - the vast majority of which were in China - on Sunday, bringing an end to the slight decline in numbers over the last two or three days.

In Japan, more than 2,000 people - including an Irish couple - are stranded aboard a cruise liner which has been refused entry to Yokohama Harbour in Japan after the ship was quarantined amid fears of a coronavirus outbreak on board.

Since the quarantine has been put in place, more than 60 cases have been confirmed on the ship.

So far, around 360 cases have been reported outside of mainland China.

The coronavirus has statistically surpassed a similar viral outbreak - SARS - which occurred in China in 2003.

Only 774 people died from SARS, 134 fewer than have died from the coronavirus.

Despite surpassing SARS' death toll however, the coronavirus is considered to be less deadly than the virus which swept the region 17 years ago.

With roughly 40,000 cases of coronavirus worldwide and roughly 900 deaths (so far), it means that statistically speaking, one in 40 people have died from the disease.

By contrast, there were only around 8,000 confirmed cases of SARS, and with roughly 800 reported fatalities, the likelihood of dying from the disease is a much more frightening one in 10.