A GROUP of swimmers from Dublin have set a record for swimming the North Channel between Co Down and Scotland in 13 hours in the depths of January, remarkably with no wetsuits.

The six swimmers completed one hour each of the swim to reach the 35km distance between the two countries, and raised almost €40,000 in the process for the Gavin Glynn Foundation, a children's cancer charity.

The Walrus Swim Team, comprised of Niamh McCarthy, Declan Bradshaw, Vincent Donegan, Ger Kennedy, Colm Morris and Dave Berry set off from Donaghadee in Co Down at 6am on Friday 14 January and arrived at the cliffs of Scotland at 8pm.

Speaking to the Irish Post, Declan explained how the idea of the swim came about.

"It's a goal of every open sea swimmer to have a go at one of the seven ocean swims," he said.

"However, no one has ever done it in winter, and that brings with it different challenges. There's absolutely no way someone could do the swim solo in cold."

The idea came from Ger Kennedy, a world-renowned ice swimmer. He was previously the first man to complete the Ice Sevens Challenge, the rules of which state that contestants must complete a mile-long swim in ice water with a temperature of sub 5°C on each of the seven continents.

"He had been trying to get people to do this swim for years, but it just never got off the ground," Declan explained. "The right timing and the right people just never came together."

As a result of the pandemic closing all public swimming pools in Ireland for an extended period of time, Ger decided to create the Walrus Challenge, the intent of which was to promote sea swimming in a safe environment.

He set challenges for those who got involved to reach targets each month, with the six swimmers taking on 10km outdoor swims in the early stages of the challenge.

"It was November 2020 when we started, and we got into this rhythm and we found that we really enjoyed cold water swimming through the winter."

The route that the team undertook last Friday.

Declan says that the thrill of open water swimming is addictive, and the endorphins that he and the team got from training is what kept them coming back.

"Towards the end of summer 2021 then Ger said he thought we were the guys that would be able to do it with him," Declan said. "To be honest we thought he was nuts! But we went along with it and started training in earnest for it in September."

The Irish Long Distance Swimming Association (ILDSA) soon endorsed the team's efforts and became involved in setting an arduous qualification process to allow the group to attempt the swim.

The team knew they wanted to complete the swim in January, but certain conditions needed to be met before getting into the water.

There was a two-week window which gave the best tide and weather conditions.

"We were constantly watching the weather forecast and looking at all these apps that described the wind and the wave motions. We thought it would be Wednesday, then it was Thursday and eventually we landed on Friday."

The ILDSA finally signed off on their medical records and the team then entered the water on Friday morning at 6am.

Ger started the swim, and each team member completed one hour before returning to the boat which guided them.

After each hour of swimming, they focused on getting warm as their internal temperatures had dropped to 28°C.

"It's a very long hour of swimming, because all you can see is the boat and there's no milestones or land masses that you can point out," Declan explained.

"There's a few people on the boat like the pilot who is watching and guiding you, and an observer from the ILDSA to ratify the swim and who is also checking our stroke counts.

"I have 48 strokes in a minute, but if that dropped to 40 or less then I would have been in trouble."

Declan describes the hour of activity following the swim as "arduous".

"The blood totally leaves your extremities so it's very difficult to get dressed, move your hands, put on your socks or anything. You need help to get dressed! No matter what clothing you put on, you're not going to warm up so you have to exercise with squats and stretching and shaking." 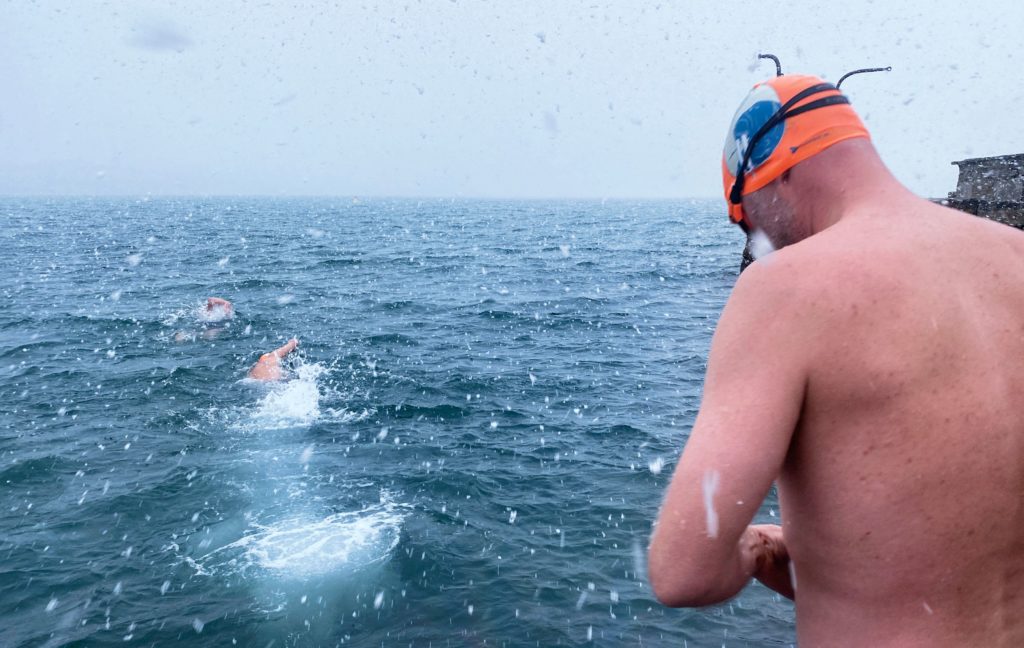 A snap of the team completing the North Sea Challenge last week (pic: @openwater_snap on Instagram)

Ger was the only one of the group who had to swim three times, with the rest each swimming twice. This was better than they had expected, as they had thought to complete the swim in 15 or 16 hours, which would have required four of the team's members to swim three times.

After a time of 12 hours and 51 minutes (awaiting ratification), the team reached the cliffs of Scotland, only to turn around on the boat and return to where they had started in Donaghadee, where they were greeted by a large crowd of supporters.

Not only have the team achieved a record for completing the swim with no wetsuits in winter, but they have also raised almost €40,000 for the Gavin Glynn Foundation -  a charity which supports families who going through childhood cancer.

"We are delighted to have raised that and are blown away by the support given," Declan says.

"When I was looking for donations in work, for example, even to twelve people told me about how they had experience with having to leverage the foundation."

The charity helps families by paying for flights and accommodation in situation where they need to travel abroad for treatment, and generally covers cost of living and logistics in such situations.

Donations for swim are still being accepted, and the donation page can be accessed by clicking here.