Eamonn Holmes cheekily asked The Queen for an interview after he was made an OBE at a ceremony at Buckingham Palace this morning.

Posing for photographs after the ceremony in which he was made an OBE for services to the broadcasting industry, Holmes told the Press Association: “She talked about breakfast television and asked me how long I had been doing it, and I said ‘too long’.

“I told her that I have interviewed almost every member of her family except her. I said, ‘so you have got to put that right for me’.

“She laughed – I think that meant no.”

I am “always seeking the interview, just trying to get the big names”, he added.

When he was asked after the ceremony how he felt, the TV and radio presenter said that he was “feeling very honoured, very privileged and very humbled”. 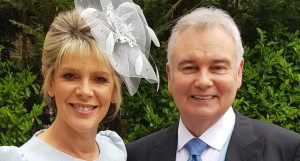 Ready for the Palace - Eamonn Holmes with wife, Ruth Langsford

Holmes began his career on Ulster Television before his big break as the presenter on GMTV, hosting the first show in 1993. He currently hosts a regular show on Talk Radio and guest presents on Good Morning Britain on ITV.

He also presented The Irish Post Awards last year and is due to present at this year's awards in November.