Europe's refugee crisis: Ireland has a human and historical duty to help

KOS, GREECE - AUGUST 13:A Syrian refugee couple as they arrive at a beach on the Greek island of Kos after crossing a part of the Aegean sea from Turkey to Greece on a dinghy August 15, 2015. (Photo by Milos Bicanski/Getty Images) *** Local Caption***

THIS is a difficult period in world history.

Some of the richest countries are struggling to emerge from recession.

Wars are being ferociously fought in the Middle East and in Africa. And millions are fleeing those same wars to seek refuge and better lives abroad.

The southeast of Britain is experiencing travel chaos because of the hundreds (if not thousands) of immigrants who are trying to reach your shores from France.

British politicians are talking about the need to build higher walls and use fiercer dogs in order to keep this refugee crisis under control.

The situation isn’t quite as serious here in Ireland but there is still heated debate about immigration.

A new political party called Identity Ireland was recently formed and it’s taken a strong stand on the issue.

The members of this party believe that there is a significant difference between the ‘ethnic Irish’ and those who are merely Irish citizens.

They want Ireland to take control of its borders back from the European Union. 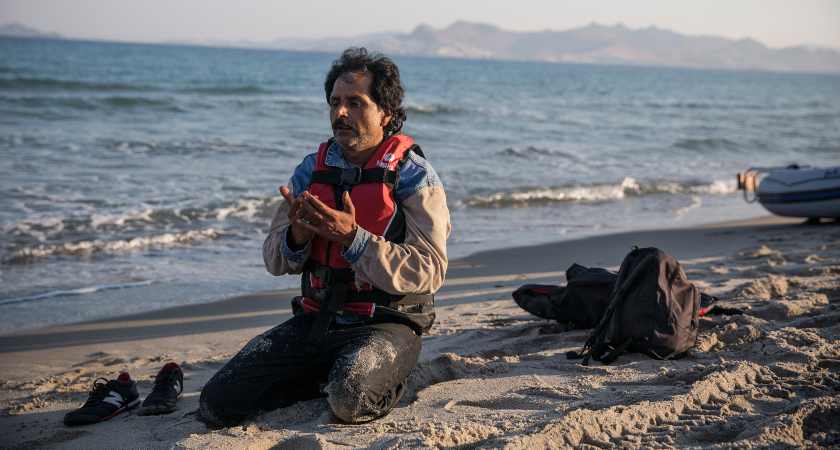 A man from Pakistan prays as families arrive on a beach in Kos, Greece from many parts of the Middle East and Africa. Picture: Getty Images

They want to end the current immigration policy. And they want any immigrants who lose their jobs to be deported if they fail to find other work within a specified period of time.

I am not advocating an open immigration policy. I don’t think Ireland should open its borders to all and sundry. This wouldn’t be reasonable or even possible.

But I do expect Irish people to show more compassion than they have to date. Our society is based on migration.

Every single Irish person has an aunt or uncle, cousins or even a brother or sister who lives abroad. All of those people left this country for a better life abroad, whether by choice or not.

The tide of migration turned during the Celtic Tiger era and migrants began to arrive in Ireland. We welcomed them for the most part because they were willing to do jobs that Irish people were no longer willing to do.

Now things have changed again but people are still eager to come to Ireland. I think we have a human and historical duty to help as many of them as we can.

We would be ignoring a historical debt and the example of the many thousands of emigrants who left these shores if we did otherwise.