THE RELATIVES of the victims of an IRA bomb attack in Hyde Park in 1982 are set to receive damages.

Four British soldiers were killed by the blast of a car bomb set off by suspected IRA member John Downey as the soldiers paraded from their barracks to Buckingham Palace.

The families of Squadron Quartermaster Corporal Roy Bright (36), Lieutenant Dennis Daly (23), Trooper Simon Tipper (19), and Lance Corporal Jeffrey Young (19) brought the civil action against Downey after a criminal case against the Donegal native collapsed in controversy at the Old Bailey in 2014.

Last year, a British high court judge rules that Downey was an "active participant" in the bombing and was jointly responsible with others for the attack, which ultimately left 31 people injured.

The bomb, which was set off in South Carriage Drive killed two of the soldiers instantly, while Young and Bright died a few days later.

Seven horses were also put down due to injuries sustained in the attack.

At a remote High Court hearing on Tuesday, Mrs Justice Yip announced that damages would indeed be awarded to the families of the victims, with the amount set to be determined at a later date.

Downey did not play any part in the trial, but filed a written defence denying any involvement in the attack, according to thejournal.ie. 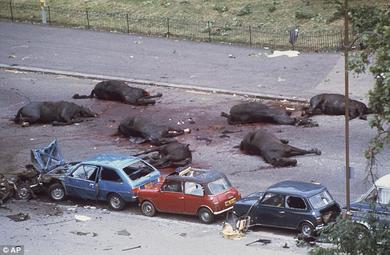 John Downey: Irishman, 67, accused of IRA Hyde Park bombing to be extradited to UK over murder of two soldiers in Northern Ireland