LONDON, UNITED KINGDOM - JUNE 13: Activists from far-right linked groups chant as they face police officers in Trafalgar Square on June 13, 2020 in London, United Kingdom. Following a social media post by the far-right activist known as Tommy Robinson, members of far-right linked groups have gathered around statues in London. Several statues in the UK have been targeted by Black Lives Matter protesters for their links to racism and the slave trade. (Photo by Dan Kitwood/Getty Images)

DEMONSTRATIONS BY far-right protestors gathering to “protect London’s monuments” descended into violence and running battles with the police today.

A large group made up of veterans, far-right protestors and football fans gathered in the UK capital as part of a concerted effort to “defend” memorials and statues from planned anti-racism protestors.

It comes after a statue of slave trader Edward Colston was toppled by protestors attending a Black Lives Matter demonstration in Bristol last weekend.

A similar protest in London also saw a statue of Winston Churchill in Parliament Square defaced with graffiti which read "racist".

London Mayor Sadiq Khan had already moved to have several statues, including that of Churchill, boarded up ahead of more demonstrations this weekend.

However, that didn’t prevent far-right groups from descending on London for a protest that quickly turned violent, with ugly brawls breaking out between demonstrators and police. 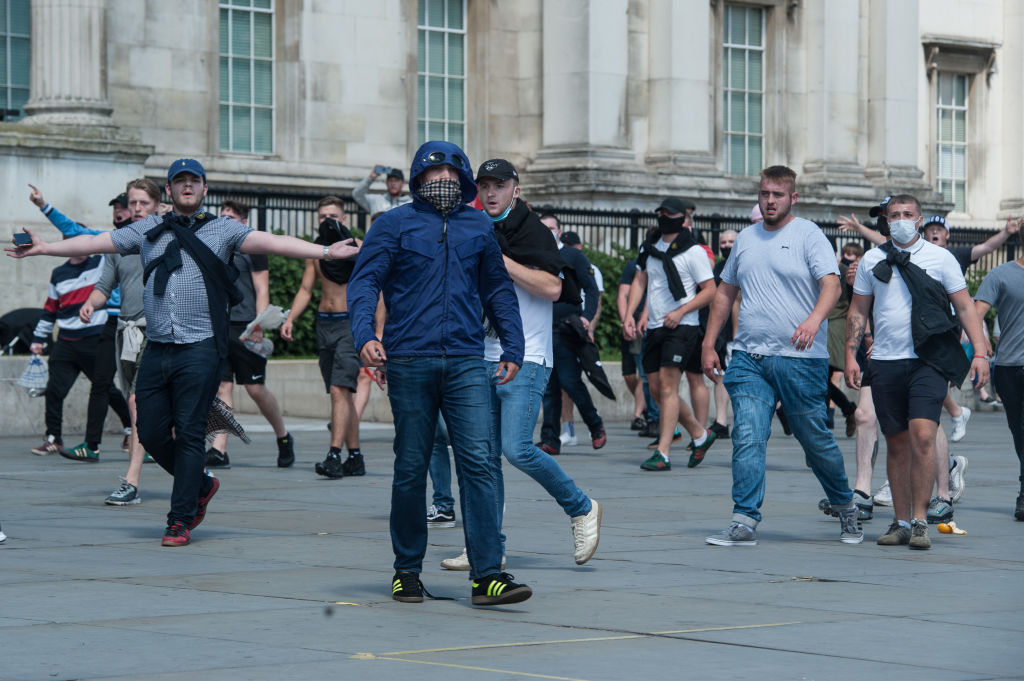 Footage widely shared on social media showed punches being thrown by those in attendance while in one instance a press photographer suffered a broken nose at the hands of one demonstrator.

Fireworks, smoke bombs and bottles were hurled at officers on duty, with the unrest beginning around the Cenotaph on White Hall before moving on to Trafalgar Square.

On Parliament St, in front of the police cordon 100m from the Cenotaph pic.twitter.com/Rd72kXofnh

The violence could have been far worse had a planned demonstration by the Black Lives Matter movement not been cancelled after receiving word that “many hate groups” were planning a counter-protest.

Scotland Yard had already issued a Section-60 order for the protests, which gave them increased powers to stop and search.

A spokesman said: “We have learnt that some people are coming into London to cause harm and are likely to bring weapons with them.” 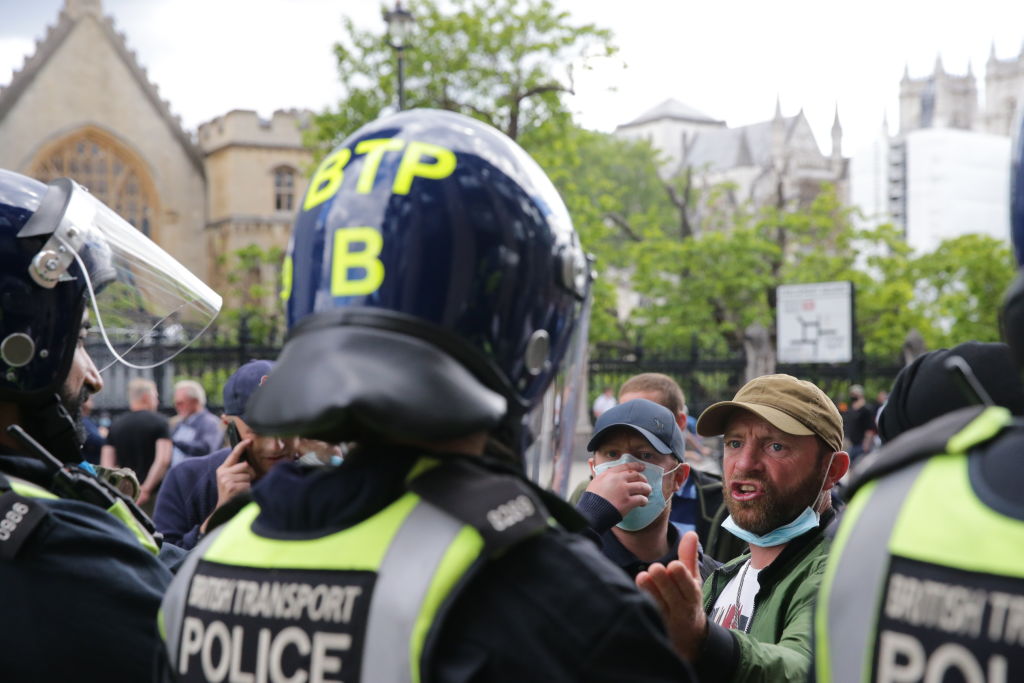 Hundreds were seen congregating around London memorials before the violence flared, with representatives from several right-wing groups pictured there including Britain First, Democratic Football Alliance (FLA) and English Defence League.

Social media was flooded with disturbing footage of the clashes between protestors and police.

More violence against police on Bridge street, next to Big Ben. pic.twitter.com/tazFZTefFn

According to a statement from the London Ambulance Service, 15 people were treated for injuries including two police officers.

The Met Police had originally placed restrictions on several groups intending to protest, including a 5pm curfew.

However, several groups remained in central London long after the cut-off.

“Any perpetrators of violence or vandalism should expect to face the full force of the law,” she said.

“Violence towards our police officers will not be tolerated. Coronavirus remains a threat to us all. Go home to stop the spread of this virus & save lives.”

A Journalist has just been left a with broken nose at the ‘patriots’ rally. Further evidence these people have no interest in anyone’s freedom but their own, especially the press. Thugs. Even Churchill would hate them. pic.twitter.com/KRWWc2khLw

Despite the cancellation of a London demonstration, Black Lives Matter protests went in other citieis including Belfast, Bristol, Brighton and Glasgow.

The global protests against police brutality and racism were sparked by the death of George Floyd in Minneapolis, while in police custody.