FIREMAN SAM has been dubbed 'outdated' by a British fire service and has subsequently been dropped as their mascot.

The central character in the popular children's TV series has been accused by the Lincolnshire Fire and Rescue Service of not being inclusive.

Lincolnshire's chief fire officer Les Britzman says that Fireman Sam's name should be changed to Fire Fighter Sam, in a bid to encourage more women to join the force.

"We're trying to save people's lives here, not be politically correct.

"The reason more women don't want to be firefighters is because of images like Fireman Sam. The character itself is outdated. 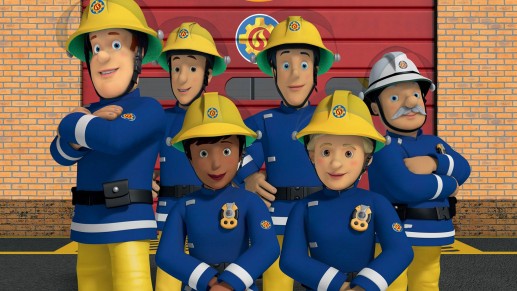 Fireman Sam is being slammed for not being inclusive, despite the presence of women and ethnic minorities in his fire fighting team

"I think the producers would probably get more fire and rescue services wanting to use the character and the programme if they brought themselves up to date a bit, that's all we're asking."

He argues that the portrayal of fire fighters in the show means girls are unlikely to grow wanting to work in the industry.

"There's been a lot of research that says that images that young people have about what careers they want to do are formed when they are about four or five," Mr Britzman added.

"If you are promoting that image we might be stopping people wanting to apply for the fire service 20 years down the line."

The Fire Brigades Union (FBU), have backed the decision, saying that keeping the mascot did not reflect attempts to diversify the fire service.

FBU executive council member Ben Selby said: "We're not bothered about Fireman Sam, we're bothered by the subconscious message the term fireman has created as an issue in our recruitment."

While this isn't the first time Fireman Sam has been described as 'outdated', - earlier this year, London Fire Bridge accused Fireman Sam and fellow children's TV show Peppa Pig of sexism - there has been an online backlash to the news, with many calling the decision to axe the mascot as politically correct nonsense.

On Twitter, one user wrote: "when my daughter was little everytime we saw a fire engine she got so excited that fireman sam was in it. She didnt worry that it wasnt firewoman sandra. This is getting so stupid now.

Another wrote: "It is ridiculous. I gew with fireman Sam and Postman Pat and I'm okay. Grew into a strong willed independent woman! Because of the real people who influenced me in life, my mum, aunties, sister, teachers etc. Some people to just get a grip!"

Fireman Sam has been running on British television since 1987. It now includes disabled and ethnic minority characters, and female firefighter Penny Morris is a longstanding member of Fireman Sam's team in the show.

"It's the most PC show on TV," another Twitter user wrote, "why are people so desperate to find outrage where there isn't any?"

The whole #FiremanSam thing is a bit ridiculous. We can’t sideline all male role-models - we just need more female ones.