FOUR friends have overcome sores, sea sickness and 40ft waves to become the fastest Irish team ever to row across the Atlantic Ocean.

Patrick O’Connor, 28, Eoin O’Farrell, 26, and Seán Underwood, 26, all from Cork – and Thomas Browne, 27, from Dublin – smashed the previous world record of 35 days when they crossed the finish line in Antigua today with a time of 32 days, 22 hours and four minutes.

The quartet set out from the Spanish port of La Gomera on December 14 and held their position of sixth overall out of 26 competitors in the Talisker Whiskey Atlantic Challenge.

The @RelentlessRower team have made history as the fastest quartet from the ROI to complete the @TaliskerRace pic.twitter.com/uG1zC2FfKG

There were emotional scenes at the finish line as family and friends flew over from Ireland to welcome the foursome, waving Irish flags and singing Ireland’s Call.

The men, who spent Christmas day eating dried food from ration packs, managed to raise an impressive €22,000 (£19,500) for their respective causes.

Two of the four friends had never rowed before and another could barely swim prior to braving 40ft waves throughout the world’s second largest ocean.

A relieved and delighted Dr Eoin O’Farrell said: “It was scary out there. I can barely walk now that I’m on firm ground.”

Pat O’Connor, a part-time farmer and doctor at CUH, added: “I haven’t lost too much weight from the row at all. 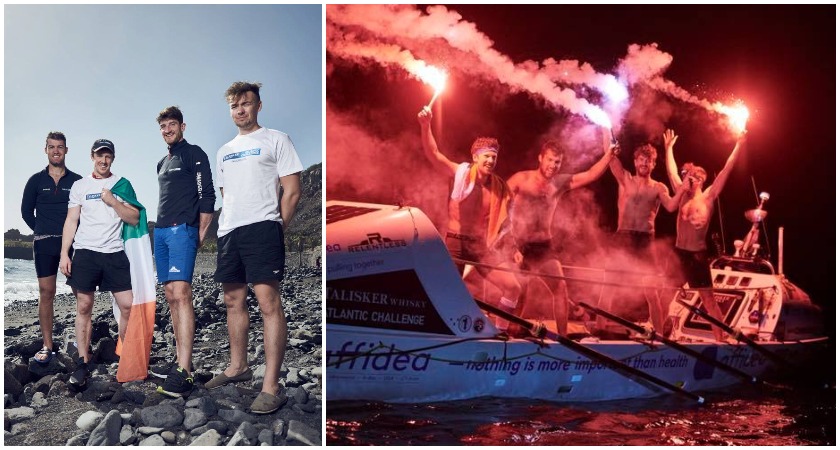 The Irishmen smashed the previous world record of 35 days with a time of 32 days, 22 hours and 4 minutes (Picture: Sarah Slater)

“I want to thank everyone so much for their support. I know we did the rowing but without all the backing it wouldn’t have been possible to make it to the end.

“It’s amazing that there are so many people here to support us and welcome us home.”

The boat that the Relentless Crew rowed and lived in for over 32 days was a mere 7.5 meters long and 1.8 meters wide and built of wood, fibre glass, carbon fibre and Kevlar.

A small cabin was the only protection the team had against the ferocity of the ocean, the baking sun and hallucinations brought on by sleep deprivation.

“It feels a bit surreal at the moment, it’s been so long coming,” said Seán Underwood.

“To actually arrive now on solid ground – it doesn’t feel so solid, we’re kind of swaying around the place – it feels great to be here, absolutely amazing.”

A British team, ‘The Four Oarsmen’, clinched the title and became the first team to row across the Atlantic in under 30 days, raising more than £250,000 for charity.

The team crossed the finish line at 2am on Saturday with a time of 29 days and 15 hours – beating the previous record by no less than six days.