AN ILL-TEMPERED bride-to-be has left the internet divided after hitting out at her maid of honour for having the audacity to get engaged ahead of her own wedding.

The unnamed woman took to Mumsnet to share her woe, explaining that she was three months away from getting married while also expressing concern her friend could now be distracted with plans for her own nuptials.

The bride, who wrote under the username FireHazrd, claimed her maid of honour had a track record of copying everything she does.

She also questioned the validity of the engagement, noting that her friend had only been with her new fiance for a year.

"I do believe they love each other and I genuinely am happy, I just wish they'd waited a few months more."

"I'm happy to still have her in my bridal party, she is my best mate, I'm just a bit peed off about it all," she added.

"Am I being a horrible bridezilla type?" 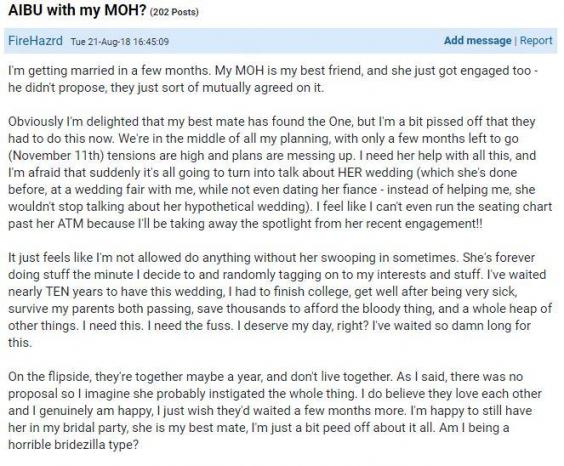 Though there was no suggestion her friend would be removed from her role as maid of honour, FireHazrd's outburst did prompt some criticism from other users on the forum.

Some took a diplomatic approach to her comments.

"Enjoy the build-up to your wedding! No reason she can't get excited about hers at the same time and you can share each other's excitement and experience," Sirzy wrote.

Others weren't quite as forgiving.

"My god you are being very very unreasonable. Complete bridezilla," Badwifey wrote.

"It sounds like she's not even truly a friend op because if she was you'd have been genuinely delighted for her. Get over yourself."

"You sound like a jealous 7 year old. Grow up," FlyingElbows added.

Though FireHazrd attempted to justify her claims, pointing to her friend's past behaviour and the fact she had a habit of "constantly talking about her wedding plans" her response seemed to fall on deaf ears.

"It's interesting that in talking about your big day and what you deserve and blah blah blah you never once mention your husband to be," LeighaJ responded.

"Comes across as very shallow like you just want your big day and the groom is just a co-star… we can only hope that their big day goes without a hitch because judging by this, it will be eventful."