A GRANDFATHER’S impassioned condemnation of his daughter’s decision to kick her young son out of the family home after he came out as gay has gone viral.

According to a report from Bored Panda, when the gay man, named Chad, decided to tell his mum the truth about his sexuality he was greeted with scorn by her.

She reportedly branded him an “abomination” and declared that homosexuality was “against nature” before turfing him out onto the street.

Thankfully Chad found love and support at this difficult time in the form of his grandfather, who wasted little time in writing to his daughter to condemn her actions.

“Dear Christine: I’m disappointed in you as a daughter,” he wrote, in the letter shared widely on Imgur.

“You’re correct that we have shame in the family, but mistaken about what it is.

“Kicking Chad out of your home simply because he told you he was gay is the real ‘abomination’ here.  A parent disowning her child is what goes ‘against nature’. 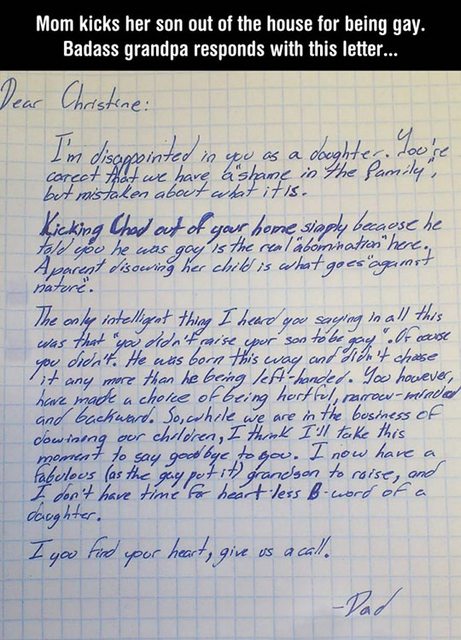 “The only intelligent thing I heard you saying in all this was that ‘you didn’t raise your son to be gay’. Of course, you didn’t. He was born this way and didn’t choose it any more than he being left-handed. You, however, have made the choice of being hurtful, narrow-minded and backward.

“So, while we are in the business of disowning our children, I think I’ll take this moment to say goodbye to you. I now have a fabulous (as the gay put it) grandson to raise and I don’t have time for heartless B-word of a daughter.

“If you find your heart, give us a call.”

A powerful message of hope and support, the letter has subsequently gone viral while Chad is reportedly now living with his grandfather in a caring and inclusive family environment.

Scientific study concludes there is no single ‘gay gene’