THE AUTHOR of one of the world's most recognisable children's books has sadly passed away at the age of 77.

Sam McBratney wrote 'Guess How Much I Love You' in 1994, a beautifully illustrated story about the love between a father hare and his child which became one of the world's most beloved children's books.

The bedtime story has been translated into 57 languages and has sold more than 50 million copies worldwide-- and a new companion book, titled 'Will You By My Friend?' is due to come out next month.

Mr McBratney wrote over 50 books in his lifetime, though none other reached the classic status of the tale of the two nutbrown hares.

He was born in Belfast and attended college in Dublin's Trinity College, working as a teacher before committing himself to writing full time.

As reported by The Bookseller, Mr McBratney's character publisher Donna Cassanova expressed her deep sorrow at the news of the acclaimed author's passing, stating:

"I feel such great sorrow at the passing of my dear friend Sam, but also an immense sense of pride, and privilege, to have worked for so long with such a master of his craft. Through the years, as Guess How Much I Love You achieved great success and acclaim, Sam never failed to express his profound surprise at the power of the message within his text. The joy he felt at knowing so many people around the globe connected with the gentle celebration of unconditional love was ever palpable. 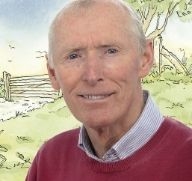 Sam McBratney has passed away at the age of 77 (Image: The Bookseller)

"It is also the true mark of the man that he never failed to recognise the role that Anita Jeram’s exquisite illustrations play in the success of Guess How Much I Love You. They were a literary pairing of the highest calibre. Sam faced everything in life, and death, with such great, good grace and humour. He always smiled out at the world, and I feel so lucky to have felt the warmth of his smile."

"Sam McBratney was a profoundly lovely human being," she said.

"You could recognise his voice in a moment—he was an exceptionally talented wordsmith and always knew exactly what children would enjoy hearing the most. Amazingly humble, he also was a hilarious storyteller and convivial companion. We never had better days than when he would come down from Ireland to visit the offices in London.

"Our world dims with his passing, but his legacy of kindness and humour will burn bright and carry on across time and distance through his stories, which have touched the hearts of readers around the globe."

Sam McBratney's final book, 'Will You Be My Friend?' will be released across the globe on 29 September.

See More: Guess How Much I Love You, Sam Mcbratney