A HERO IRISH paramedic in New York jumped into the freezing Hudson River to save a man from the icy water.

Niall O'Shaughnessy, 40 and originally from Co Limerick, jumped into the river on Saturday afternoon, one of the coldest days in New York.

Paramedic O’Shaughnessy - who has been serving with the FDNY for 11 years - and his partner Mingze Wu were driving up the West Side Highway in Lower Manhattan shortly before 3pm when they saw a group of police officers near the river’s edge. 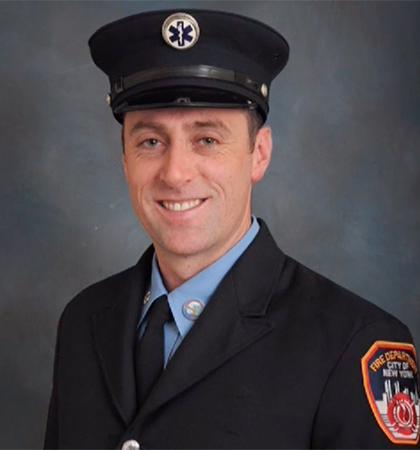 Niall O'Shaughnessy has served with the FDNY for 11 years. (Picture: NBC New York)

A man had jumped into the Hudson, and while police officers had lowered a life ring to him, the icy temperatures of the water meant he was beginning to lose consciousness.

Despite the -4 temperature and snow falling, the Irishman took off his equipment belt, grabbed a flotation device from his truck, and jumped in after the man.

“After I submerged and came back up, I put my arms around the victim," he said.

Great Job by #NYPD Harbor & @FDNY rescuing a male that jumped into the Hudson River. A FDNY Paramedic jumped in after seeing the male in the water. Responding NYPD Harbor launch #452 assisted in removing the male from the water. pic.twitter.com/flmCKEPmfb

"It was really cold. I felt the cold set in about 30 seconds.

"After a minute, my hands and arms weren't working as well. From my training I know hypothermia sets in that quickly," he added.

The man and O'Shaughnessy were taken to a nearby hospital following the rescue and it's understood the man is in a stable condition.

Mr O'Shaughnessy got warmed up and returned to work soon after.

It's not the first time he has rescued someone from the Hudson River - he also saved a woman who had jumped into the waters back in July 2015.

Niall O'Shaughnessy also saved an Irish woman who had fallen between train cars at the 49th Street subway station in Midtown in 2014.