HILLARY CLINTON has been appointed as the new chancellor of Queen's University Belfast.

In doing so, she becomes the first woman to ever hold the position.

Clinton, who received an honorary degree form the college in 2018, said it was a "privilege" to take up the role, before adding that she has "great fondness" for the university.

"The university is making waves internationally for its research and impact and I am proud to be an ambassador and help grow its reputation for excellence," she said.

The former US Secretary of State will no hold the position for five years, taking over from Dr Tom Moran who died in 2018.

The chancellor role is a largely ceremonial one which typically sees the person appointed presiding over graduation ceremonies and other significant events.

The college also said that Clinton, as chancellor, will act as an advisor to the senior management of Queen’s, while also acting as an ambassador for the university.

Clinton, along with her husband Bill, visited Northern Ireland on a number of occasions during the 1990s, where she offered support for the ongoing peace process.

After receiving her honorary degree in 2018, Clinton used the opportunity to call for Northern Irish politicians to "put their quarrels aside" and to return to Stormont following the power-sharing disagreement in 2017. 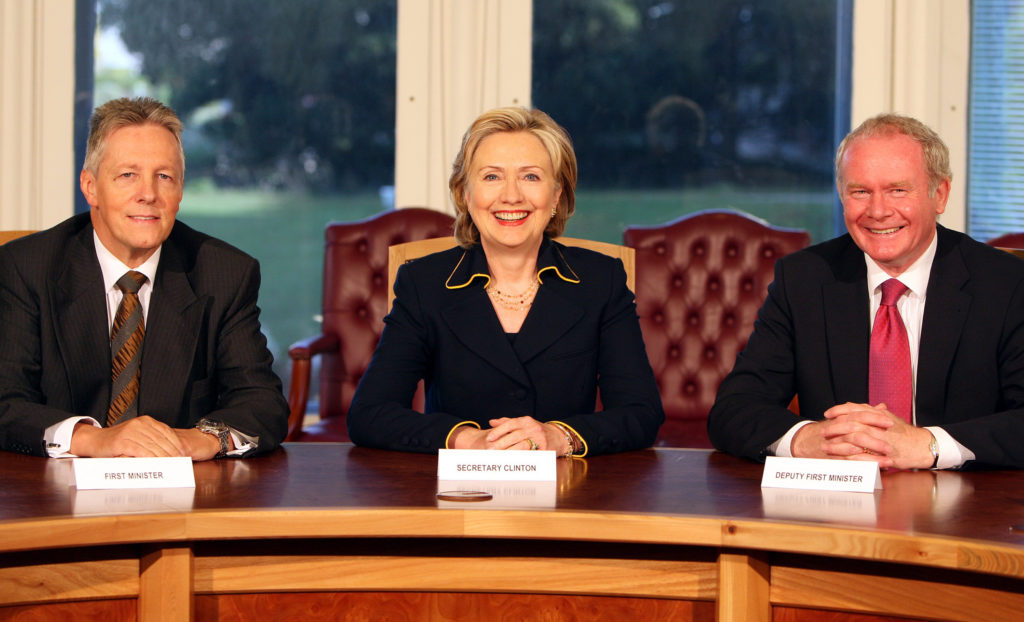 Hillary Clinton (C) poses for pictures with Northern Ireland's First Minister Peter Robinson (L) and Deputy First Minister Martin McGuinness (R) at Stormont Castle in Belfast, on Monday October 12, 2009. Secretary of State Hillary Clinton was on Monday to offer renewed US support for Northern Ireland's peace process and help to resolve a political stand-off threatening its power-sharing government. Clinton was in Belfast to meet the province's leaders and make a major speech to its assembly, in a bid to boost efforts to defuse the row which has brought the fragile cross-community administration to a standstill.

Stephen Prenter, Pro-Chancellor and Chair of Queen’s University Belfast Senate, said that "Clinton has made a considerable contribution to Northern Ireland and as an internationally recognised leader will be an incredible advocate for Queen’s".

Local SDLP MP, Claire Hanna, said that the appointment of Clinton is a "positive reflection" on Queen’s and on Northern Ireland.

"This new role is an extension of her long-standing commitment to people in Belfast and across the North," she said.