Tyson Fury punches Deontay Wilde in the seventh round fighting to a draw during the WBC Heavyweight Championship at Staples Center on December 1, 2018 in Los Angeles, California. (Photo by Harry How/Getty Images)

Tyson Fury is in the shape of his life and ready to make history when he goes toe-to-toe- with Deontay Wilder in the Grand Garden Arena in Las Vegas this morning.

The Manchester-born fighter surprised many when he took Wilder to the brink the last time these two fought back in December 2018.

Wilder was expected to make light work of a boxer out of shape and lacking verve since a clinical points victory against Wladimir Klitschko in mid 2015.

Fury is candid about his lack of motivation in that interim period and was reduced to a figure of fun when he ballooned to 400lbs between that success and the showdown with Wilder. 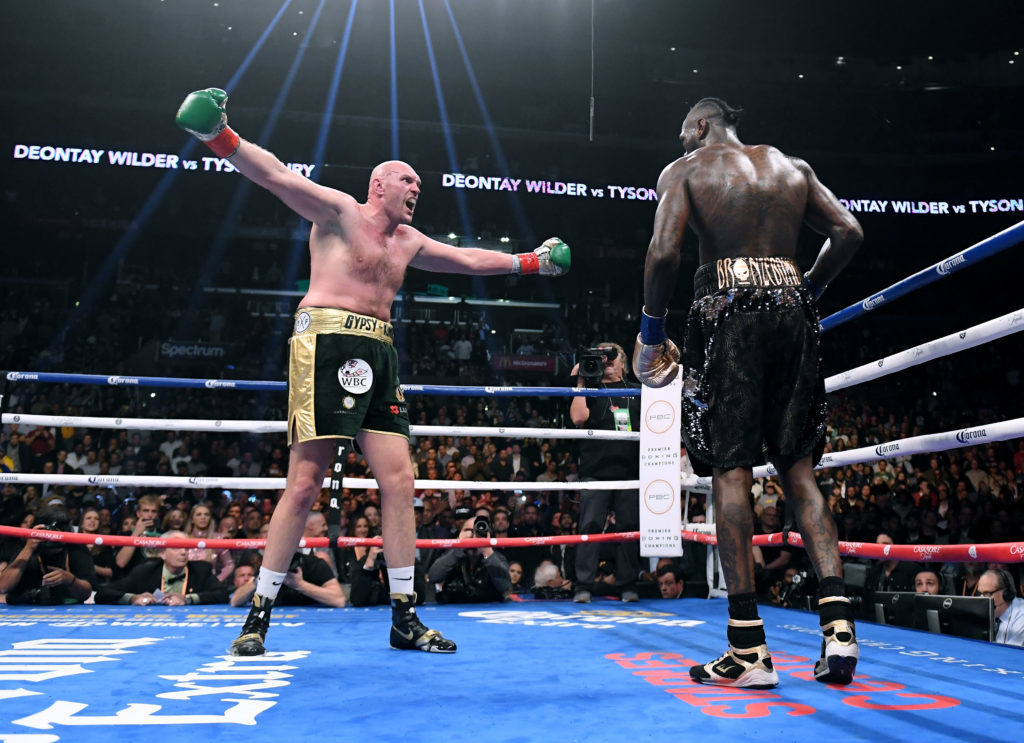 Tyson Fury taunts Deontay Wilder in the ninth round fighting to a draw during the WBC Heavyweight Championship at Staples Center on December 1, 2018 in Los Angeles, California. (Photo by Harry How/Getty Images)

But Fury gained deep respect in the boxing fraternity with a boxing masterclass last time out against the Bronze Bomber – the consensus being he should have left Las Angeles last time with the belt.

“Tyson was robbed with that decision there is no question of that,” Irish middleweight star Matt Macklin told The Irish Post.

“He has shown he can beat Wilder now.

“Tyson is without a doubt the most naturally gifted of all the heavyweights out there.

"He’s been hitting the hand and boxing with his father from three years of age. It’s ingrained in him. He was born to fight.

“Wilder is a huge puncher.   But the most natural talent out of all of them for me is Tyson.”

Fury’s display last time out highlighted his nimble footwork and ability to duck a punch. Economy of effort and intelligent boxing.  For the rematch, he backs punch power to decide the outcome.

“It’s been no secret that I’m looking for a knockout,” he said this week.

“That’s why I hired  SugarHill Steward and went back to Kronk (the famous gym in Detroit). "He gets you to sit down on that big right hand. That’s the game plan.”

A win for Fury tonight will truly cement is place amongst the boxing greats of the Irish diaspora.

Heavyweight John L Sullivan – the Boston Strongboy – reigned from 1888 to 1892 and was the son of a Kerry father and a Westmeath mother.

The man who succeeded him, James Corbett, was the son of a Mayo father, as was the great unbeaten champion of the 1920s Gene Tunney.  Irish American boxing legend Jack Dempsey defeated Jess Willard to win the world title in 1919.  Tunney - the Fighting Marine- sent shockwaves through boxing when he beat Dempsey by unanimous decision in 1926.

James J Braddock was also from Irish emigrant stock and defeated Max Bauer in one of the greatest upsets in boxing history back in 1935.

As far as Irish-born fighters are concerned, Barry McGuigan and Steve Collins rightly take their place amongst boxing royalty.

McGuigan for his memorable performance against Panama's Eusebio Pedroza to secure the WBA & Lineal Featherweight titles at Loftus Road in 1985.

Fury taps into the Fighting Irish legacy and has never forgotten his heritage.

Indeed, he cites it as motivation still.

"All my people are from Ireland,” he told Irish Central.

“I was born in Manchester but I am Irish. I have lived in Ireland, visited all my life, and when I fight, I represent Ireland."