AN URGENT appeal for information has been launched after a stolen pet dog was found with her microchip gouged out of her skin.

As Ireland experiences a spate of dog-nappings which experts are calling an 'epidemic', there have been multiple horror stories of family pets being taken from properties to be sold abroad or used as bait in dog fights.

While few are seen again once they have been stolen, there have been a small number of stories with happy endings-- however so far, this is not one of them.

Four days later, Daisy was found by a kind-hearted member of the public in Dublin and brought to the DSPCA, who reunited her with her family--but tragically her puppies were not with her.

And while a family being reunited with their beloved dog should be a happy time, Daisy's owner Patricia was horrified to see that her pet had suffered a brutal neck injury.

The thieves who had stolen Daisy and her puppies had physically cut the microchip from under her skin using a knife so she could not be traced before dumping her on the street 120km from her home in Wexford.

Patricia has urged anyone who may have bought a springer puppy in recent days to do the right thing and come forward to the authorities, as Daisy is traumatised from the ordeal and is "looking for her puppies".

She told RTÉ Liveline that her much-loved pet was "dumped on the street to starve, but the worst thing was they had actually taken a knife to her neck and removed her microchip and left her there".

"We have her home now but she is looking for her babies," Patricia told the radio show.

It is unclear how the thieves knew where to find Daisy and her puppies, but rumours are circulating on social media that the professional criminals are using drones to look into people's gardens.

The family were only aware their pets were missing when the daughter went out to the locked kennel in the morning to let the dogs into the house. 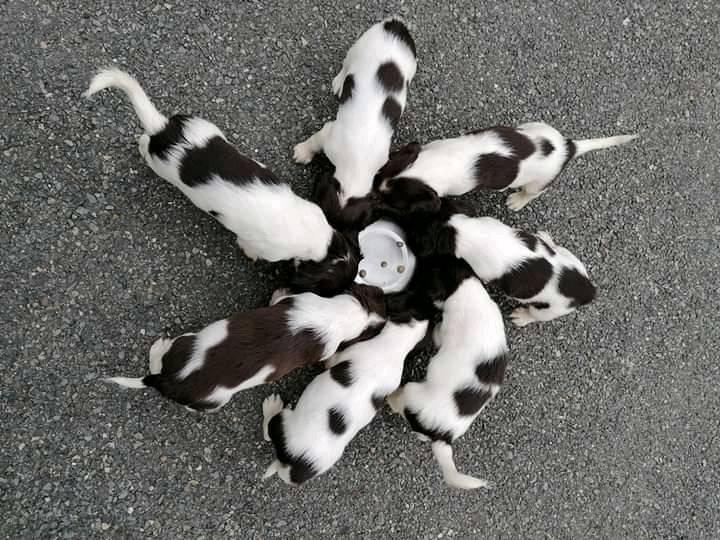 "There was a lock that was broken, a padlock," Patricia explained. "They had brought some sort of a tool and they broke it."

The puppies were due to go to their new homes this week as they turn eight weeks old, and Patricia is pleading with anyone who may have recently bought a springer puppy or seen them advertised online to come forward.

"If anybody out there has bought one in the last few days, I just beg them to do the right thing," she said.

"If they have any idea or any inkling that it may be one of Daisy's puppies, please do the right thing."