THE Belfast building where the RMS Titanic was designed is to be turned into a luxury hotel.

A Heritage Lottery Fund grant of £5 million will see the Harland and Wolff building on Queen’s Island transformed into a boutique hotel.

The four star establishment is expected to house 84 bedrooms and the renovation project is set to create 100 jobs in the city.

Harland and Wolff’s headquarters has been vacant since 1989. The imposing building was the scene of the Titanic’s design process and provided the shipbuilding company with an eagle eye view of the construction process, just along the waterfront.

Due to its historic significance, the site is grade B+ listed, meaning any renovation work will have to keep as many of its original features as possible. 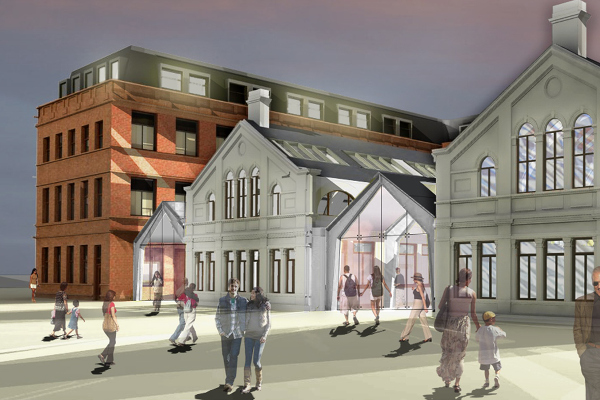 An artist's impression of how the hotel will look. (Photo: Titanic Foundation)

The Harland and Wolff building, the administration centre for the company's shipyard,  was a hive of activity during the  golden age of  shipbuilding in the early 20th century.

Their doomed Titanic passenger ship was designed by Thomas Andrews, a local man who went down with the liner.

After being launched in Belfast, the Titanic made its way to Liverpool and Cobh before setting sail across the Atlantic, where it sank in the early morning of April 15, 1912.

The city's Titanic Quarter area continues to be a popular tourist destination, particularly since the opening of the Titanic Belfast museum in 2012 - which coincided with the 100th anniversary of the ship's fateful maiden voyage.

As well as the tourism industry, the Titanic Quarter is home to the Titanic Studios – an 11,000 square foot development, comprising one of Europe's largest film studios, where the likes of Game of Thrones is shot.

The new hotel will be a Titanic Foundation venture.

It is set to incorporate the existing building while a new extension to the front will include the hotel reception area.