'I didn't even know President Higgins was coming to Britain'

IT'S 10AM in Maggie’s Café in Lewisham High Street. Trade is steady in an institution that has served tea and bacon to Irish customers for more than 30 years.

Cavan proprietor Maggie Khondoker, whose name sits above the door, says half her customers are from Ireland while it’s estimated recent arrivals have boosted the number of Irish in the borough by nearly 50 per cent.

Just down the road planned redevelopments are expected to draw more Irish construction workers into the area.

This morning, two builders from Waterford and Leitrim are seated and waiting to be served. Both arrived in Britain more than 20 years ago when Mary Robinson was president; however both are unaware of the pending visit of Michael D Higgins.

“When is he coming,” asks John, from Lismore, in Co. Waterford.

“Yeah, I knew lots about the Queen’s visit to Ireland but I haven’t heard anything about this visit, no.

“All I’ve been hearing about is what’s been going on with the gardaí at home.”

“You know what the best way is to read an Irish paper? Upside down,” jokes the builder from Leitrim in reply to an explanation the state visit has been widely reported in the Irish media. 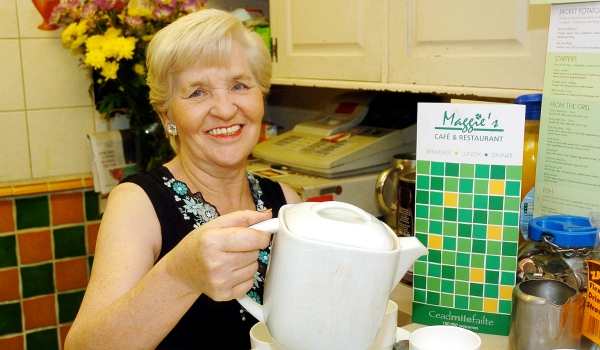 Maggie Khondoker, from Cavan, is proprietor of Maggie's Cafe in Lewisham

John spent 10 years working for Murphys in London but is cynical about politics and the significance of the visit for the Irish in Britain.

“I think their interest is in themselves really,” he says.

So has there been much talk among Irish customers about the visit?

“Well, I hadn’t heard anything about it at all,” says Maggie. “But I was watching the English news last night and it was reported that someone important in the force stepped down back home. Is that right?”

Maggie explains she has not returned to Ireland for many years and her expression of Irishness relates in the main to conversations with other Irish people in Britain.

“I’m very proud to be Irish, but I couldn’t tell you who was president of Ireland when I left,” she says. “I’ve been here a long time. My life and children are here.

“It’s a good thing, but I don’t know if this is something that I will be taking a big interest in.”

The door opens and the cold of the day leaks into the café along with a new customer.

“Dún an doras,” she banters as Stephen Dwyer comes in and sits down across from the builders. Aged 38, he grew up in Ealing to Irish parents.

“My mum was from King Street in the inner city,” he says. “My dad is from Glasnevin.

“They are very much Irish. They still have their accents. But I’d be surprised if they knew about this visit.

“I didn’t know anything about it until you told me. I don’t think it would be something they’d be too excited about?”

Dwyer’s brother emigrated to Dublin aged 23 to take up a banking job. The Ealing native says his sense of identity is not as strong as his sibling.

“The Diaspora, yeah I’m familiar with the term but I don’t really feel it counts for me. I think you are the product of your environment and I was raised in England.” 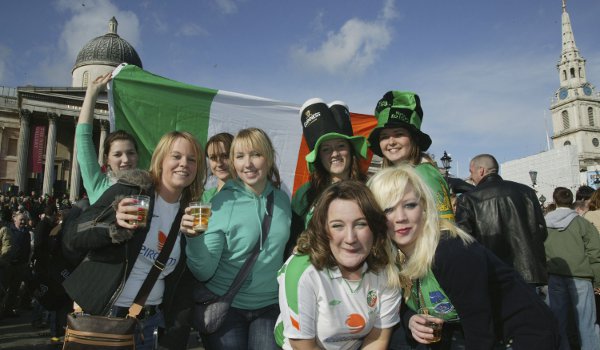 The Irish Diaspora in London on St Patrick's Day

Despite that he has rich Irish heritage, explaining that his grandmother worked as a street trader selling fruit on Moore Street.

“I used to go back when I was young and my cousins would say ‘do you know why you have dirty knees? From climbing up Maggie Thatcher’s backside’,” he asks.

Asked what President Higgins’ wish to embrace the Diaspora means to him as a second generation Irish person he says: “You look at Ealing now compared to when we were young. We used to be made to go mass every week and the churches were full of Irish then.

“It used to be all second generation Irish in school together, living in the same areas. It’s not like that now. Now the Polish community have replaced what the Irish were doing 20 years ago.

“The Queen’s visit was significant but I don’t think this is the same and wouldn’t feel a connection to it as someone who grew up here.”

The sentiment is shared by Maggie’s son Anthony who works in the cafe.

“I think in London, everyone is just very busy working,” he says taking an order.

A call is made later to two long-term Irish Post readers to canvas their thoughts.

“I hadn’t much awareness about the visit but yeah I will be proud,” said Pat Kane.“It’s important but for me and the Irish over here long term, the visit of the Queen to Ireland was the big one.”

Ambrose Gordon echoes this sentiment, adding: “How important is it to me? Well, for me being here through the Troubles and the tough times in the ‘90s the Queen’s visit to Ireland was the one that counted. It was the full stop on it in terms of marking a better relationship between both countries.”