A COUPLE in Ireland are celebrating becoming millionaires after a second lottery win in as many years.

Amazingly, it comes exactly two years after the couple won £20,000 on the Lotto Millionaire Raffle.

On Thursday, Ciaran and Catherine – who have four children aged between two and 10 – kicked off the celebrations at the Greenville Hotel in Cookstown, where they celebrated their wedding 12 years ago.

Catherine, who is originally from Rochdale in Greater Manchester, plays the lottery online, and initially thought she had won a free lucky dip when she got an email telling her she was a winner.

She said: "I assumed that we’d won a free lucky dip as that is the most regular outcome but I wasn’t able to check on my computer at work, so I phoned Ciaran and asked him to check at home – as I couldn’t settle with the suspense until I found out.

"After a few minutes, he called me back and said I must have given him the wrong details as the system was showing that we’d won a million pounds on the EuroMillions Millionaire Maker.” 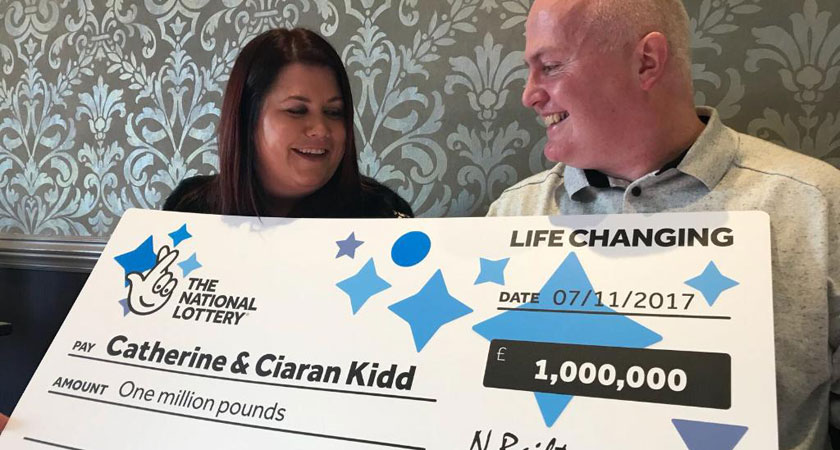 With each thinking the other was playing a prank, Catherine called Camelot who confirmed she and Ciaran were millionaires – before having to go back to work.

“After confirming the win with I thought my heart was going to burst out of my chest as I sat in work for the rest of the day – trying to control my emotions and asking myself if this was really happening," she said.

"When I got home, Ciaran and I just stared at each other as if to say, ‘Can you believe this is happening’ and gave each other a big hug.

“It was, and still is, totally surreal."

Ciaran added: “"We're very normal down-to-earth people who have been lucky to experience something that is far from normal – and we feel very privileged to be in this position.

"Nobody ever thinks this will happen to them but we are living proof that it really can happen to anyone."