'I'm proud of my identity, but to him I am an Irish tw*t' - Irishman's shock after British councillor's racial tirade

AN IRISHMAN has spoken of his shock after a British councillor launched an anti-Irish tirade at him.

Philip Henry, 48 and originally from Belfast but living in Stone, Staffordshire, was on his way home on January 18 when Councillor Allan McCulloch called him an 'Irish tw*t.'

He later confronted the councillor and recorded the incident on his phone which led to Councillor McCulloch being charged by Staffordshire Police with racially aggravated public order and common assault.

The councillor, 62, pleaded guilty at Cannock Magistrates on July 14 where he received a 12 month conditional discharge and fined £576, which was increased from £346 due to the racial element of the offence.

McCulloch was also ordered to pay £60 compensation to Mr Henry, which the Irishman intends to donate to Refugee Action to help Syrian families rebuild their lives in Staffordshire.

Speaking to The Irish Post, Mr Henry said: "Initially I was just totally shocked and appalled.

"I was simply reminding him to be more careful in his driving - and for that he felt justified to call me an 'Irish tw*t' - a phrase I still can't get out of my mind."

Mr Henry says the incident begun after he moved out of the way of Councillor McCulloch's reversing car at Stone Railway Station.

The Belfast-born businessman says he approached the driver to ask that he be more careful, but in response Councillor McCulloch - the vice chairman of Stone Rural Parish Council - said: "Yeah, thanks for that. Now get out of my way, you Irish tw*t."

A few moments later Mr Henry says the Councillor passed the station again in his car and parked at a building nearby.

"I was absolutely determined to challenge him so I decided to enter the building - at this point I had absolutely no idea he was a councillor and that he was about to join several colleagues for a formal council meeting," he said.

Mr Henry says he entered the room where the council meeting was taking place and requested to speak to the councillor. 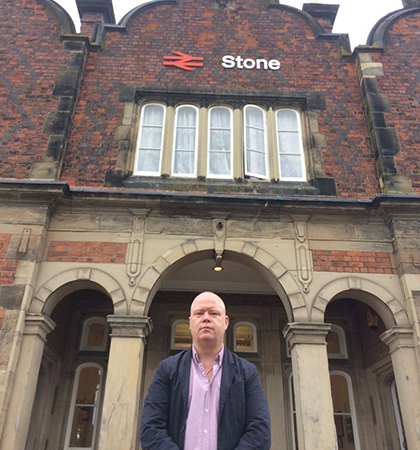 "I reminded him that he called me an 'Irish tw*t'. I could hear and see out of the corner of my eye that his town council colleagues were laughing.

"At this point Mr McCulloch replied at least four times, 'Yes, because you are,' and firmly pressed his index finger into my chest and repeatedly started to push and poke me around which made it very difficult for me to remain upright."

The Irishman says he then told the councillors he intended to go to the police about the incident.

"I wouldn’t allow this individual to treat me as someone not worthy of respect and dignity because of his perception of my nationality," he added.

"Mr McCulloch leaned over, gloated several times that I had no proof or witnesses," Mr Henry said. "But of course little did he know that I was recording the whole encounter."

Almost seven months after the incident, Mr Henry - who has worked and lived in Britain for over 20 years, and lived in Staffordshire for well over a decade - says McCulloch has made him feel 'unworthy of basic humanity and rights as an Irish citizen.'

"My identity is something of which I am proud, but to him I am an ‘Irish tw*t’. This is not simply an issue of manners, politeness, driving, or the assault.

"Mr McCulloch and his colleagues perceived me on the basis of my accent and national identity to be a lesser human being, someone less worthy.

"I am glad that I was not raised to carry his hate. It is so harmful to individuals and society that it cannot be tolerated. It has no place in our society."

Stone Rural Parish Council did not respond to The Irish Post's request for comment, however Allan McCulloch is still listed as the Vice Chairman and representative for the Aston ward.