Houses of Parliament and Big Ben in London in summer

AS BRITAIN grapples with the outcome of the Brexit referendum, since June 23 the British Government has been unable to guarantee the rights of EU citizens living here in the long term.

However, a seldom-discussed piece of legislation called the Ireland Act of 1949 means those from the Republic are in a better position that other EU citizens living in the UK.

What is the Ireland Act 1949 and how important is it after Brexit?

The Ireland Act is legislation passed in the British Parliament that was designed to deal with Ireland's new status as a Republic.

But what has it got to do with Brexit?

Under the Act, Irish people living in the UK are described as "non-foreign" which means they maintain a special status within United Kingdom, unlike citizens from other EU counties.

Why does this matter?

The UK has voted to leave the European Union and the rights of European citizens to live and work in the UK are no longer guaranteed once the Prime Minister invokes Article 50 and formally begins Brexit negotiations. 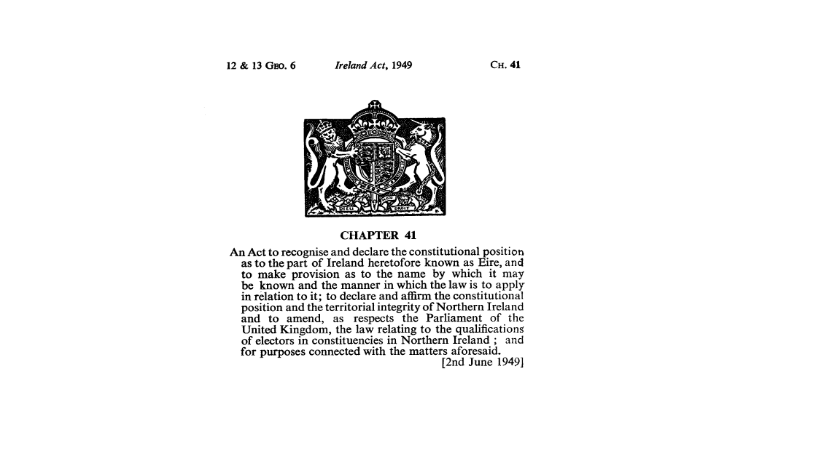 An extract from the Ireland Act, 1949

Does the Ireland Act mean for the Irish in Britain nothing will change as a result of the referendum?

Maybe. The UK Government says it plans to continue to comply with all current UK legislation, however the Act was in place before the establishment of the EU, of which Ireland remains a member, meaning the Act may need to be reexamined.

Why and what would that mean for the Irish in Britain?

Questions might now be posed by the UK Government as to whether it remains appropriate to classify Ireland, and its citizens, as ‘non-foreign’, potentially affecting all of the entitlements that come with the unique status.

Citizens of Ireland, Cyprus and Malta are the only EU members allowed to participate in UK Parliamentary general elections and referenda. A reciprocal agreement allows British citizens living in Ireland to vote in Dáil elections. Irish residents in Britain are also permitted to become UK citizens after just five years’ continuous residence, while their children born in the UK can acquire immediate British citizenship. This is a more generous regime than that applicable to other EEA and Swiss citizens and their family members, who typically require five years’ residence in order to become ‘settled’, and a further year’s residence to "naturalise".

So where's the potential snag for the Irish in Britain?

The political rights of Irish citizens in the UK have previously been questioned in a 2008 Government review of citizenship law which came to the conclusion that it is wrong to give all Irish citizens the right to vote until they become UK citizens, while preserving the right to vote for Irish citizens from Northern Ireland alone. It is likely that issue will re-emerge in the wake of withdrawal from the EU by the UK.

Why was the 1949 Ireland Act so controversial in the first place?

The Act created outrage in Ireland because its provisions guaranteed that partition (i.e. the status of Northern Ireland as a part of the UK) would continue unless the Parliament of Northern Ireland chose otherwise. The revival of an IRA in the early 1950s has been attributed by Irish historian Tim Pat Coogan to the strength of popular feeling among nationalists on both sides of the border against the Act.