IRELAND has ranked well above Britain when it comes to welcoming expats, however neither country made a dent on the top 25.

The Emerald Isle came 30th in a list ranking countries on how welcoming they are to foreign residents, while Britain languished in 56th.

Ireland also ranked higher than America (36th), Australia (37th) and Germany (47th) in the list of 65 countries compiled by InterNations, a website and resource for expats.

Ireland and Britain have been drifting apart in InterNations’ annual rankings over the past three years. 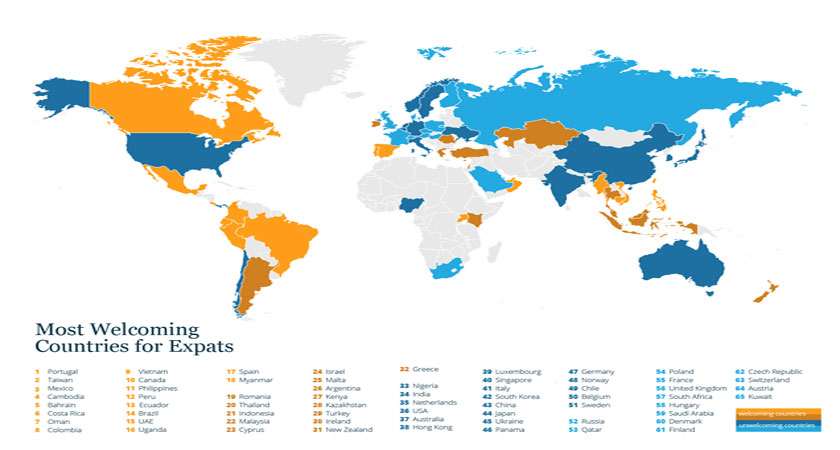 Ireland was the 30th most welcoming country for expats (Image: InterNations)

In 2014, Britain (19th) ranked above Ireland (23rd) but they have gradually switched places.

According to the latest survey, 76 per cent of expats in Ireland found local people friendly towards them, as opposed to 50 per cent in Britain.

In Ireland, 59 percent of expats said it easy to make friends with locals, compared to 38 per cent in Britain.

Meanwhile 49 per cent of foreign residents said they would like to stay in Ireland forever, compared to just 28 per cent in Britain.

According to the InterNations report, an Italian expat values the “genuine friendliness” of the Irish, but a Portuguese national in Britain stated that "recently, I get the sense that foreigners are not as welcome as I thought before the referendum".

'They now how to have a laugh'

When asked how they would describe their social circles, 22 per cent of expats in Ireland said they were mainly friends with other expats, but 37 per cent were mostly friends with local residents.

A Swedish expat living in Ireland said the Irish are “sociable, friendly people who know how to have a laugh and enjoy themselves”.

Kuwait (65th) ranked bottom of the list, while Austria (64th) was the lowest ranked European country.