IRELAND has been ranked 17th out of 49 European countries in an annual report on LGBT+ rights.

Ireland was given an overall gay rights score of 47%, considerably lower than the UK's eighth-place score of 65%. 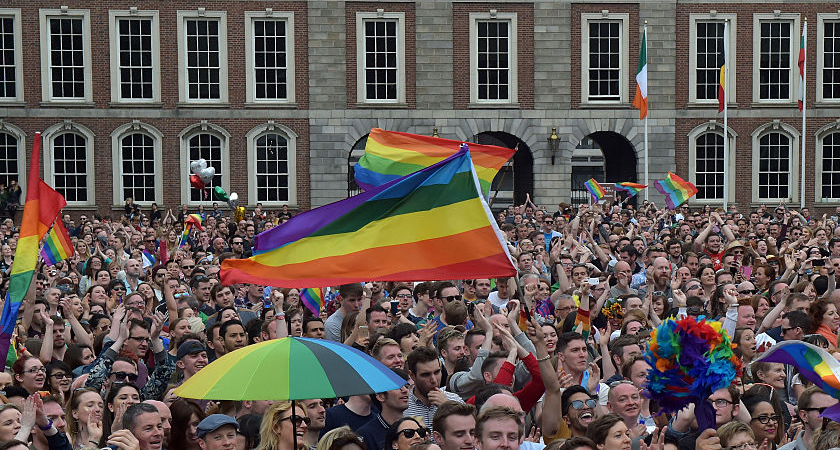 Gay marriage was legalised in Ireland after a referendum in 2015 (Image: Getty)

Ireland scored just 13% for tackling hate crime and hate speech, 17% for supporting the rights of LGBT+ asylum-seekers and 24% for equality and non-discrimination.

However, the Emerald Isle scored highly in the "legal gender recognition and bodily integrity" category at 69%, and even higher for marriage equality and the rights of LGBT+ families with 76%.

Ireland was also given a score of 100% in the "civil society space" category – meaning no State obstruction of freedom of assembly or enough protection for public events.

The report made a number of recommendations to Ireland to improve its score, including updating the country's existing legal framework for legal gender recognition – in accordance with the Gender Recognition Act 2015 – to ensure the process is free from age limits and explicitly includes intersex and non-binary people.

It also calls on the Irish Government to adapt a comprehensive national action plan on LGBTI equality that "expressly mentions all SOGISC (sexual orientation, gender identity, sex characteristics) grounds and fully implement the actions outlined in the LGBTI+ Youth Strategy 2018-2020."

To view the Rainbow Europe 2019 rankings in full click here