IRELAND'S finance minister Paschal Donohoe has been elected as the new president of the eurozone's finance group - the collection of finance ministers from the 19 countries that use the Euro currency.

Donohoe takes over from former president Mário Centeno from Portugal who said in June he would not run for another term as Eurogroup president.

He won out against Spanish Minister of Economy Nadia Calvino, who had been in pole position to take the job.

In a statement on Thursday evening, Donohoe said: "The Eurogroup is the economic engine for the Eurozone and the single currency.

"My immediate priority, as President, will be to chart a common way forward on building the European recovery, strengthening the Eurozone economy, and promoting sustainable and inclusive growth for Member States and their citizens. Across the EU our citizens are looking to us to provide the necessary leadership.

"I will bring to the table Ireland’s experience as a small Member State that has been a Programme country but which has also seen its economy and society transformed through EU membership." 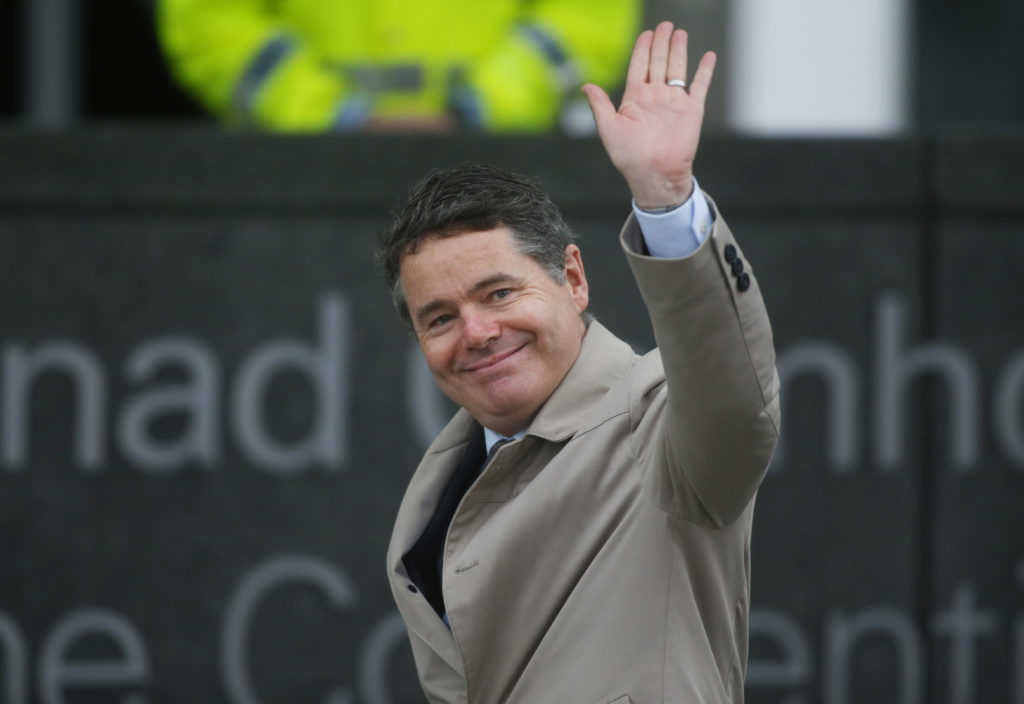 FILE PHOTO Paschal Donohoe has been elected president of the Eurogroup END 27/06/2020. Covid-19 Pandemic (Coronavirus), Ireland, Lockdown Day 93 Day 20 of Phase two. Election of New Taoiseach. The Convention Centre in Dublin, Ireland, where the Dail is sitting today, to elect a new taoiseach, who is expected to be Micheal Martin, Leader of Fianna Fail, who will then form a government between Fianna Fail (FF), Fine Gael (FG) and the Green Party (GP). This is a historic development as it is the first time the opposing Civil War parties FF and FG have sat in government together. The reason for the Dail meeting in the Convention Centre, because the extra space is needed for social distancing protocols. Photo shows Paschal Donohoe who is set to contine as Finance Minister arriving at the Convention Centre. Photo: Sam Boal/RollingNews.ie

He will still perform his role as Ireland's finance minister alongside the role as president of the Eurogroup.

"We are in the midst of a profound economic challenge as we speak tonight," he said.

"There are so many citizens here in Ireland and across Europe who are unsure if they’ll have a job, what their income is going to be tomorrow and so many employers worried that they might not be around next year.

"So the number one fiscal priority has to be reaching agreement in relation to the recovery fund and then implementing it," he said.

"This is a very proud achievement for Minister Donohoe and is a testament to his personal experience and skills," he said.

"It is also good news for the country. At such a critical time for the Eurozone economy it is very important to have an Irish voice influencing decisions and economic policy."

Tánaiste Leo Varadkar, echoed Martin's statement, stressing that the appointment was "something that was very good for Ireland".